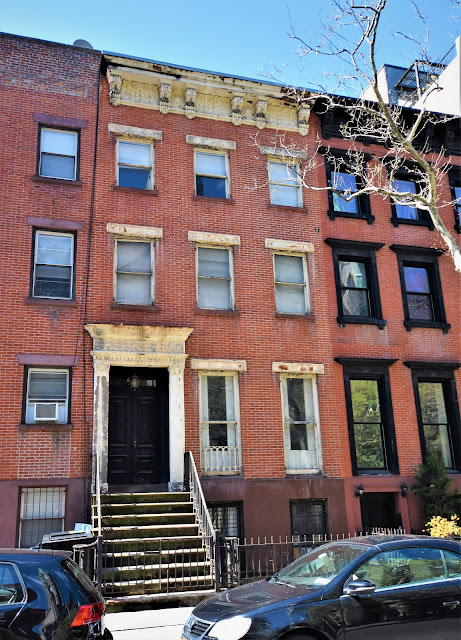 In 1843 developer James Phelan began construction of a 20-foot wide brickfaced home at No. 312 West 22nd Street, between Eighth and Ninth Avenues.  The Greek Revival-style residence was completed the following year and exhibited the expected elements of the style--a high stone stoop, brownstone pilasters upholding a substantial entablature above the double-doored entrance, and understated stone lintels and sills.

Phelan sold the house to 48-year old Charles W. Sanford and his wife.  Of their two sons and two daughters, it appears that only Alice and Charles, both unmarried, moved in with them.

A successful lawyer, Sanford was much better known for his military position.   Having enlisted in the New York State Artillery, he rose through the ranks and was commission major general on May 10, 1839.  At that time he was given command of New York National Guard's First Division.

By now Sanford had already led his men to quell disturbances, including the Flour Riot of 1837.  Five years after moving into the 22nd Street house his troops were called to the Astor Place Riots.  On the night of May 10, 1849 an angry mob of Irish immigrants protested the appearance of British actor William Macready in the role of Macbeth.  It boiled over to violence, and even the police were driven back by volleys of paving stones.  Sanford led the attack, driving away what Harper's Bazaar called 'the bleeding rioters, demoralized and defeated."  When it was over 25 were dead and 120 hurt.

Twice in 1857 Sanford would be called to action.  On July 5, 1857 two deadly and notorious gangs--the Dead Rabbits and Bowery Boys--faced off; but then joined forces against the police when they tried to intervene.  At one point an estimated 1,000 rioters raged against the police, who sent a message to General Sanford for assistance.  The militia stamped out the uprising, which resulted in 10 dead and 80 wounded.

Unbelievably, only about a week later some of those policemen allied themselves with the Bowery Boys in another riot.  On April 15, 1857 the Metropolitan Police Act was signed into law; but some members of the old Municipal Police Department were unwilling to give up their positions.  On June 17 the two organizations faced off, resulting in a New York Times headline "RIOTING AND BLOODSHED" and a report that 16 Metropolitan policemen were injured and several rioters were dead.  Once again, it was General Sanford and his troops who ended the carnage.

General Sanford was highly visible in the pomp of parades and exercises so popular in the mid-19th century.  In reporting on the Independence Day Parade in 1858 the New York Express added, "After the parade, General Sanford, as usual on the Fourth, gave a liberal collation at his residence 312 West 22d Street, to the officers of the Division."

Sanford's son, Charles H. Sanford, was by now a lieutenant colonel in his father's division.  In 1858 he left New York to aid ousted Venezuela President José Antonio Páez in his revolution to regain power.   He was killed in action there.  It would be two years before his body was returned home.

Finally, on May 1860 the funeral was held in the 22nd Street house.  The New York Times announced "The officers of the First Division commanded by the father of the deceased, Major-Gen. Charles W. Sanford, will attend the funeral, in uniform, wearing the usual badge of mourning."

But as bloody and violent as these confrontations were, none would be worse than the Draft Riots of 1863.  Sanford had been called to active duty in Union Army on April 19, 1861.  He oversaw the capture of Alexandria, Virginia and took part in the Battle of Hoke's Run.  He returned to New York City in July that year.  The action he would see in the city was as terrifying as any he saw on the battlefield.

On July 13, 1863 outrage over the unfair draft erupted into three-days of murder, arson and looting.  Draft offices, newspaper buildings, and homes of blacks and abolitionists were burned.  Innocent pedestrians were attacked, and black citizens were murdered on the street.  The Colored Orphan Asylum was burned to the ground, its staff and young residents barely escaping with their lives.

The home of Charles Sanford was in the sights of the rabble.  But they had the wrong address.  On July 16, 1863 the Harrisburg, Pennsylvania newspaper the Daily Patriot and Union reported "The next move was to attack the elegant residence of Mr. Hawkesworth, corner of Forty-seventh street and Lexington avenue...It was said by some that Major General Sanford lived there."

The mistake was fortunate for the Sanford household, but devastating for Hawkesworth.  "The house was invaded, the windows smashed, the furniture broken, many ornaments and articles of value stolen, and, finally, the house was fired [i.e., burned].  The whole transaction well illustrated the unreasoning nature of a mob."

With most troops off fighting the war, Sanford counter-attacked the horde with a much depleted force.   Order was finally restored, but not before around 112 people were dead, more than 2,000 injured and between $20 million and $100 million in property loss in today's dollars was suffered.

Following the war Sanford turned most of his attention to business.  While still operating his law office, serving as counsel for the Harlem Railroad Company, for instance, he erected several buildings on Canal Street.

The family continued to live comfortably and entertaining regularly.  Their staff appears to have been small, however.  On July 25, 1867 an advertisement in The New York Herald sought "In a small family, a girl to do chamberwork; must understand washing and ironing."

The Sanfords summered in Avon Springs, New York.  In May 1872 an advertisement in the Herald offered the "Three story brick basement house, 312 West Twenty-second street; fully furnished" for rent.  Because it was being leased furnished, the term was most likely only for the summer season.  But that would change soon.

It was most likely Jennie Caldwell who made the unusual modifications to the facade of No. 312.  She routinely bought and sold property, often doing renovations--a sort of 19th century precursor to 21st century DYI flippers.   Ornamental cast metal lintels and an elaborate entablature were pasted over the stone originals.  Interestingly, they were not so much modernization as they were simply embellishment.

The property changed hands several times by 1902 when Oliver A. McMahon took possession.  Like all the owners since Sanford, he used it as an investment property--leasing it rather than living here.  The name of his tenant in 1906 appeared prominently in newspapers for months, but for the wrong reasons.

In January that year a racket run by the Metropolitan Street Railway Company was uncovered and William H. Tillinghast was highly involved.  He was paid to sit on juries deciding damage cases against the firm and to "swing" the decisions in its favor.  The complex scheme had deep roots.

After Tillinghast confessed, The New York Times reported on January 25, 1906 "In Tillinghast's affidavit he tells at length how agents of the street railway company packed the jury box, and how the clerks of the courts where their cases were being tried were in [on] their secrets and profited from that."

The New-York Tribune reported "His usual pay for such a service, he declares, was $40 or $50, but in a case of much importance he received as much as $100.  When the company wanted him to swing a jury, he says, word was sent to his house, telling him when and where he was to be in court, and if his name was not on the jury panel the clerks, who had been 'fixed,' would call his name anyhow."

It was not a messenger telling him to appear in court who knocked on the door of No. 312 on February 23.  The Times reported that Tillinghast "was arrested by Detective Flood yesterday in his home, at 312 Twenty-second Street, and locked up at the Tenderloin Station."

Directly across the street from No. 312 was St. Paul's Lutheran German Church.  On November 27, 1920 the Real Estate Record & Builders' Guide reported that Oliver A. McMahon sold the house to the St. Paul's, "to be used as a parsonage in connection with the church." 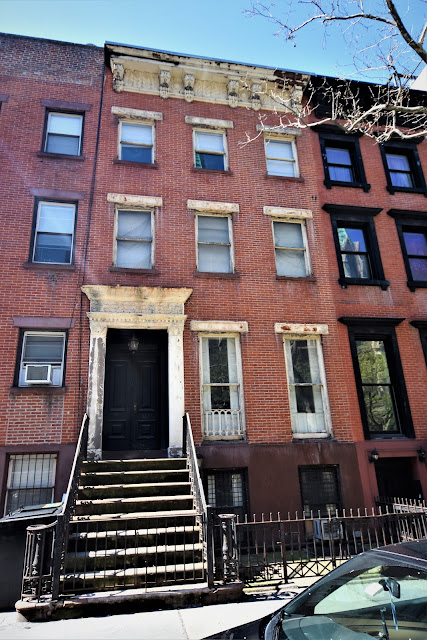 The church still owns the property today.  The many layers of paint on the stone and metal elements has flaked away in many areas, allowing rust to eat away at the uncommon 1880's decorations.  But overall the 175-year old house, once home to one of New York City's most significant military figures, survives essentially intact.

photographs by the author
Posted by Tom Miller at 3:49 AM