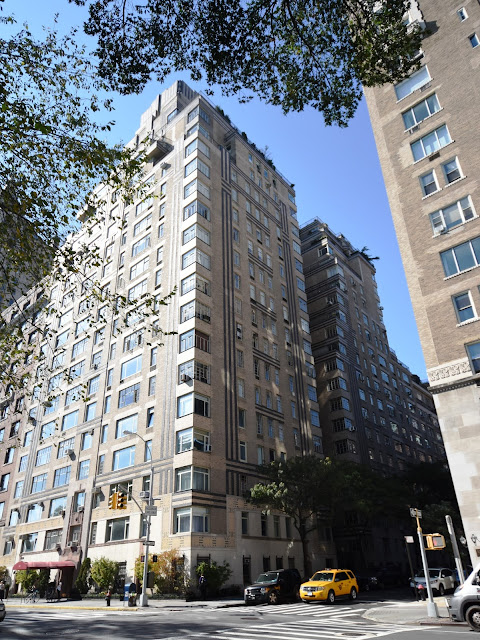 On October 15, 1900 the newest apartment house on Central Park West was ready for occupancy.  Designed by architect George W. Keister it rose ten stories on the southwest corner of 92nd Street.  The Central Park West facade was a cluster of rounded bays, affording each apartment expanded views of the park and increased cross-ventilation inside.

The upscale Ardsley Hall contained 43 suites of from six to 12 rooms, not including bathrooms or pantries.  The largest suites boasted three bathrooms.  The up-to-the-minute amenities included private telephones, electric lighting and individual "refrigeration plants."  An attractive feature was the "special entertainment rooms" available to the tenants for large entertainments or balls.

But Edwardian fuss quickly fell from favor as the Jazz Age took over Manhattan in the 1920s.  Central Park West would be transformed by the construction of sleek Art Deco apartment houses which replaced the older buildings.  Among the first to go was Ardsley Hall.

On August 8, 1928 the announcement was made that within the past six months Samuel Barkin & Sons had acquired Ardsley Hall, along with Nos. 4, 8 and 12 West 92nd Street.  The builders planned to erect a 20-story apartment house on the plot.  "This will be the largest housekeeping apartment building on Central Park West," Samuel Barkins said.  The entire project was estimated to cost about $4.5 million--more in the neighborhood of $62.5 million in 2016.

The New York Times noted "This project will necessitate the demolition of the ten-story Ardsley Hall apartment, one of the first of a group of tall apartments erected opposite the park, and three five-story flats."

The newly-formed Central Park West & 92nd St. Corp. was, no doubt, staggered by the onset of the Great Depression a year later.  Nevertheless, the massive project went ahead, with ground broken in 1930.  A year later, in the fall of 1931, the Ardsley was ready for occupancy.

The developers had chosen architect Emery Roth to design the 22-story structure.  Separately, he and Rosario Candela were perhaps most responsible for changing the streetscapes along Central Park in the 1920s.

Even during the Depression years Manhattan's wealthiest citizens spent lavishly.  On April 5, 1931 The New York Times reported that a "good rental season [is] indicated for new apartments."  The article focused on six new luxury buildings, including the Ardsley.

In 1916 New York City had imposed the Zoning Resolution which required buildings to include setbacks in order to allow light and air to the streets.  The resulting stepped high rise buildings drew comparison to ancient ziggurats.  Emery Roth took the concept a step further by decorating the Ardsley with Mayan decorations executed in black brick within the beige facade.  The result was a masterpiece of Art Deco design.  Horizonal balconies and banding were contrasted and balanced by vertical lines, some which suddenly jutted off at right angles.


Saying that The Ardsley was ideal "for those wishing an atmosphere of country life with convenience of the City," agents boasted "included in the appointment are over-sized rooms, wide windows, venetian blinds, exceptional closet space well equipped kitchens, glass enclosed showers, and trained employees to maintain the finest...standard of service."


The Ardsley was designed with tenants of varying incomes in mind.  While some of the apartments had commodious bedrooms, living rooms and "galleries," they had no servants' rooms.   In contrast were the sprawling multi-level apartments of the topmost floors.  The 11-room triplex on the 21st through 23rd floors had a wrap-around terrace on the 21st floor, and two terraces on the 22nd floor.  There were 15-foot ceilings and a wood-burning fireplace in every room.  The 23rd floor was "completely separated from the master section" and included three maids' rooms and a bath. 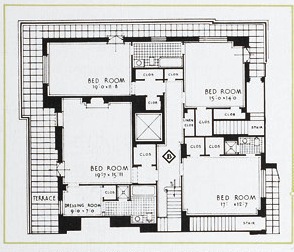 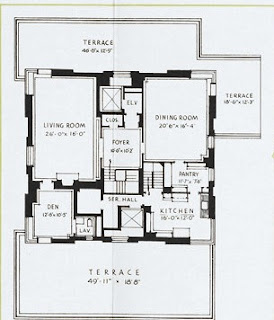 The Ardsley filled with well-heeled residents, not all of whom were on the up-and-up.  Corporate attorney Aaron Sapiro moved here from Chicago after things got a little heated there.  Sapiro was counsel for several Chicago labor groups run by underworld thugs.

On July 27, 1933 he was arrested in his 20th floor office at No. 521 Fifth Avenue.  Police had received a telegram from the Illinois State Attorney's office saying Sapiro was a fugitive and was under indictment on a charge of "causing the explosions of bombs in buildings in Chicago and also causing bodily harm to different people."

The attorney was met with a crowd of press photographers at Police Headquarters.  As their flashbulbs snapped, Sapiro reacted with sarcastic coolness.  "I'll pose," he said.

His smug attitude was relatively short-lived.  The bad press was apparently not good for business and on June 7 the following year he filed for bankruptcy, listing liabilities of $181,000 and assets of $14,425.  Court papers showed he placed a value of $300 on his "wearing apparel and books."

In the meantime, things were not going so well for the Ardley's owners, either.  On September 11, 1933 the building was sold in foreclosure actions.  The Manufacturers Trust Company took over the property with the only bid--$2.575 million.

The memories of the terrifying Lindbergh baby kidnapping two years earlier were vivid in the minds of all wealthy parents in 1934.  So Benjamin Feldman was understandably shaken when he opened a letter on May 17 that year.

In it the writer said that unless Feldman paid $500 his wife would be kidnapped.  Exactly one week later a second letter arrived, this one saying that both his wife and seven-year old son would be taken and both murdered.

Detectives were put on the case and arrangements were made to hand off a package containing the ransom in the Times Square subway stop.   When 23-year old Nicholas Garafola took the package from the undercover detective on May 25, he was immediately arrested.  Garafola had been a shipping clerk in Feldman's employ.

The New York Times reported "Garafola said he needed the money to pay off debts and insisted that he had no intention of carrying out his threats."

Among the residents at the time were retired Deputy Chief Inspector Dominick Henry of the New York City Police Department, and his wife, the former Mary Gertrude Crittenden.  Henry had changed the entire complexion of Manhattan traffic by instituting the one-way street system, and by installing the first traffic lights.  He also implemented parking restrictions.  The Times would later credit him with unsnarling "the tangle of vehicles that clogged the streets in the early Nineteen Twenties."

Mary Henry was highly educated, having attended the College of New Rochelle and Columbia University.  Her health began failing around 1937, and she died in the couple's Ardsley apartment at the age of 59 on February 24, 1938.  Dominick Henry lived on here for another four years, dying after an illness of several weeks on Saturday, February 1, 1942.

The funeral for the 74-year old former Inspector was impressive.  On Saturday morning of February 3, 117 foot patrolmen assembled in front of the Ardsley.  They, along with the Police Department band and Color Guard, escorted the body to the Catholic Church of St. Gregory the Great on West 90th Street.

The Ardley's most celebrated resident at the time was lyricist Lorenz Hart, who had signed a lease on a massive 17-room penthouse on August 4, 1939.   Half of the Broadway songwriting team of Rodgers and Hart, his lyrics to standards like "Blue Moon," "The Lady is a Tramp," and "Bewitched, Bothered, and Bewildered" were famous.

Hart shared the apartment with his widowed mother, Frieda.  Tortured in his personal life, he suffered from alcoholism and depression and was anguished by his secret homosexuality.   His mother took the upper floor of the duplex while he lived below with an expansive terrace.  His biographer, Frederick Nolan points out in his 1994 Lorenz Hart: A Poet on Broadway, "Immediately after moving in, Larry had a huge, heavy, soundproofed door installed between the two floors, so that Frieda should not be disturbed by any late-night revelries below."

On Easter Sunday 1943 Frieda Hart died.  Shortly afterward Lorenz Hart left the Ardsley and moved into a small penthouse on Park Avenue.  He died there on November 22 that same year.


World War II affected everyone in the Arsdley, as it did all Americans.  On September 18, 1943 Jerome C. Simpson was awarded the Distinguished Flying Cross in Washington DC.  A much different sort of notoriety came to 32-year old dress manufacturer Martin Asnin two months later when he was imprisoned for draft evasion.

And 51-year old William S. Orkin was disgraced when he and seven cohorts were found guilty of a racket "in the guise of aiding wounded war veterans" at a hearing on February 18, 1946.  The gang sold subscriptions to a fictitious magazine, the Army and Navy Hospital Visitors.  The District Attorney was clear in his disgust, saying "This is a particularly despicable species of fraud--exploitation of the public sympathy and admiration for wounded veterans of war."

The two-story penthouse that had been home to Frieda and Lorenz Hart was taken by Elliott Gould and his new bride, Barbra Streisand in 1963.   In her My Passion for Design the entertainer wrote that the apartment had "an elegant staircase, two fireplaces and a terrace--quite a change from a railroad flat."  In fact there were five fireplaces and seven and a half baths.

The couple had one son, Jason, while living here.  The Gould-Streisand divorce was finalized in 1971; but Streisand had already looking for a new home.  On May 3, 1970 The Times noted "Barbra Streisand is back in the market for a place to live."

The article said "Miss Streisand, who was unavailable last week for comment on her housing problem, is said to be looking for a cooperative on the East Side.  She now lives at 320 Central Park West with her son, Jason.  She and her husband, Elliott Gould, are separated." 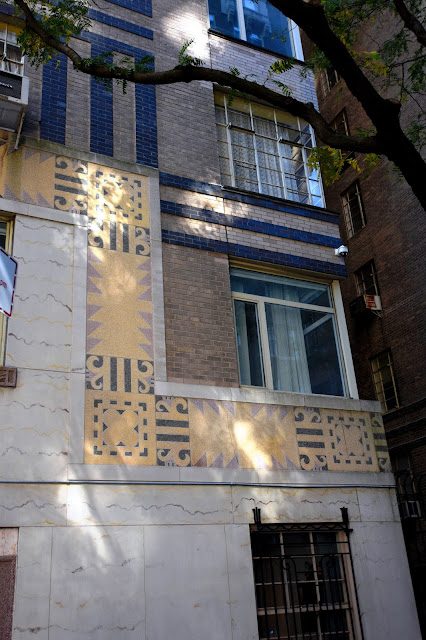 Part of the star's difficulty in finding a new residence was her reputation--not for noisy entertainments, but for being difficult.  Steven Gaines explained in his The Sky's the Limit: Passion and Property in Manhattan, "she never gave parties and hardly ever entertained.  In fact, she would have been a model tenant at the Ardsley had she not earned a reputation as the building's chief kvetch and critic, for whom nothing was quite good enough, including the way the lobby was decorated."

It seemed to be sold when 29-year old pop singer Mariah Carey offered $8 million cash and Streisand accepted.  But the co-op board was less eager to close the deal and rejected Carey as a tenant.  Reportedly Streisand was irate, telling the press "If an artist can't live on the Upper West Side, where can they live?"

She finally settled for a $4 million offer, precisely half the amount Carey was prepared to spend, from a single woman who was approved by the Board.

In 2010 a two-year restoration of the Art Deco lobby was completed by designer Scott Salvator.  Although he rarely accepted lobby designs, telling Fred A. Bernstein of The Times he "disliked working for committees;" he jumped at the Ardsley project because it was an Emery Roth work, and "it is pure Art Deco."

Salvator said he found the style uplifting.  During tough times, he said, "If you're going to have something awful, like a war, you at least want someone dancing down a stairway in a tux."


The magnificent Mayan-Art Deco Ardsley continues to house wealthy businessmen and celebrities.  In 2012 actor David Duchovny entered into contract for a $6.25 million three-bedroom apartment on the 19th floor.  Among the several massive Art Deco apartment buildings along Central Park West that compose its famous streetscape, the Ardsley is a masterpiece.

photographs by the author
many thanks to motion picture pundit John Chalupa for suggesting this post
Posted by Tom Miller at 2:50 AM