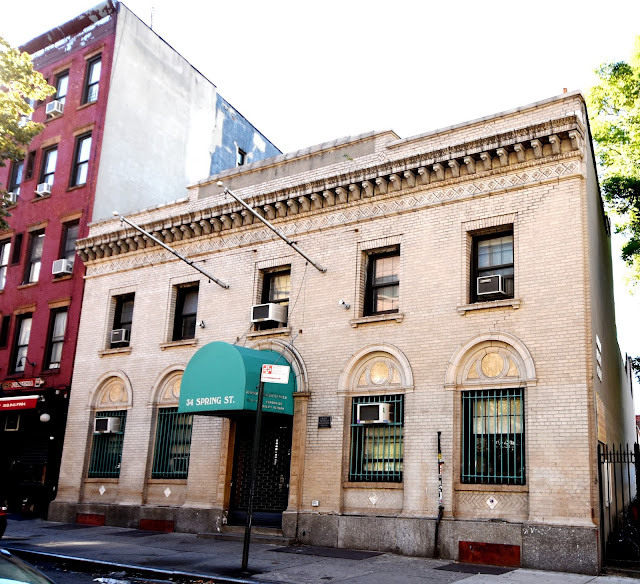 On January 4, 1791 a group of eminent citizens, whose surnames would forever be linked to New York, joined in a noble project.  Among them were Isaac Roosevelt, Robert Livingston, James and Federic De Peyster, Robert Remsen,, James W. Beekman, and John Watts.  The men drafted a constitution and by-laws for a New York Dispensary, "for the care of the sick poor of the city."

The New York Dispensary was incorporated on April 8, 1795 and began its work in a one-room building on Tryon Street, later renamed Tryon Row.  The only dispensary in the city, it was receiving 10,000 patients per year by 1828.

On May 6, 1857 The New York Times described the wretched neighborhoods served by the organization.   "In the district served by the 'New-York Dispensary,' are included some of the most dangerous portions of the City--the Five Points, and the waterside on both our eastern and our western limits, below Spring-street, and Pike-street...That these most dangerous quarters of New-York are also the most suffering quarters of New-York, that these crowded and filthy streets which invite death from abroad are the homes also of misery without a name."

The article noted "Within these limits swarm some hundred thousand human beings, whose sanitary condition may be roughly inferred from the fact that more than twenty-five thousand of them annually appear as patients at the Dispensary, while over fifteen thousand annually required the services of the Dispensary physicians at their homes."

That number was more than tripled by the end of the Civil War.  Doctors treated more than 100,000 patients either in the clinic or in their squalid tenements.  The old building was razed and replaced in 1868 with an impressive $70,000, four-story dispensary at Centre and White Streets.

Then in June 1908 it was forced to move when the City took the property through eminent domain for the building of the subway.  The esteemed architectural firm of Trowbridge & Livingston designed the new New York Dispensary building at Nos. 145 and 147 Worth Street.  The handsome $25,000 structure was opened on September 15, 1909.


Almost unbelievably, a year and a half later the City claimed that property as well.  The New York Times wrote "'Move on!' Twice has the city issues this command to the old New York Dispensary in the past five years...And now like a Nemesis comes the city again saying, 'Move on!  I need your land for improvement purposes, a park and new municipal buildings.'  So the dispensary is obliged to gather up its skirts a second time an decamp."

The New York Dispensary sat on land wanted by the City for the construction of the new Courthouse.  In June 1912 the two plots at Nos. 34 and 36 Spring Street between Mott and Mulberry Streets being used as a coal yard was purchased.   The Times described the neighborhood as a "thickly populated tenement house district" and added "A two-story building, fully equipped for all dispensary uses, will be erected from plans by Trowbridge & Livingston."


In a later article, the newspaper remarked "It has been facetiously suggested that its new building in Spring Street be placed on wheels, so that at the next municipal demand the dispensary can comply with less expense to itself."

The expense of a new building--before the last one was even paid for--was a crushing blow.  The New York Dispensary relied entirely on private donations to operate.  The American Contractor listed the cost of the newest structure at $25,000--about $630,000 in 2016 dollars.

Trowbridge & Livingston's beige brick villa design was a less-elaborate version of its previous Dispensary.  Little expense was given to unnecessary decoration to the no-nonsense, two story structure.  The blind arches above the first floor openings were inset with marble; but otherwise cost-saving brick and terra cotta made do for the lintels and cornice.

Nevertheless, the handsome Italian-style edifice was an architectural anomaly among the brick tenements and old frame structures along the block.  On November 16, 1913, the day before the new Dispensary opened, The Times reminded its readers that "From 400 to 600 patients receive treatment daily, and to defray the expense of this work the Dispensary is dependent almost entirely on the contributions of the public."

Among the Dispensary's ardent supporters was Mrs. George Jay Gould, who annually ensured that there would be temporary joy for the poverty-stricken children at Christmas.  The first year the Dispensary was opened she sent well-needed gifts to 75 little boys and girls.  The New-York Tribune wrote "No one knew for several days who it was that gave them their sweaters and mittens and had them delivered at the institution anonymously."

A "Christmas entertainment" sponsored by the Dispensary's social service department was held the day after Christmas, prompting The Sun's headline "The Late Mr. Santa There."  One of the medical staff, Dr. Merriam, dressed as Santa Claus and distributed presents to 500 children who enjoyed "the songs and recitations as they munched candy, cake and oranges." The Sun opined "The entertainment was a jolly one."

The Dispensary was a clinic--not a hospital--and on rare occasions that difference caused problems.  Such was the case on January 21, 1915 when Mrs. Clara Smith was petting one of her three cats in her home on Renwich Street.  Suddenly the pet bit into the index finger of her left hand.  She went to the New York Dispensary and was treated for the small wound.

Then 11 weeks later she was removed to St. Vincent's Hospital where, coincidentally, her 12-year old daughter Katharine was already being treated for pneumonia.  Dr. William W. Cox examined her, and diagnosed her throat spasms, intervals of rigidity of the body and jaws, and related symptoms as rabies.

The doctor visited the Renwich Street home, where he found the cat crouching in the corner, hissing and baring its teeth.  "I ordered it crated up," he told reporters.

The importance of home visits was exemplified in the report of the Crippled Children's East Side Free School in 1918.  It reported "For the reception of cases requiring closer attention than is possible in a day school the New York Dispensary is open without cost.  In a single year the surgeons and physicians have paid nearly 500 visits to the homes of pupils."

The Dispensary's own Annual Report for 1923 showed that 5,789 patients had received dental care, 92,890 prescriptions had been filled, and 40,520 patients had been treated in the clinic.  Another 3,757 patients had been visited in their homes.  The report proudly boasted that "The grand total of patients treated since its foundation in 1790 now amounts to 4,944,822."

A change had taken place, however.  Most patients now paid 10 cents toward their treatment.  "In the beginning it was a free Dispensary caring for the destitute," noted the Report.  "As the years have gone by, the destitute have been more and more cared for by the State and City Institutions and are supported by us all when we pay our taxes.  Although the New York Dispensary still cares for many cases free of charge...it has gradually become an institution used chiefly by those who, while too poor to pay a private doctor, can pay a small amount for medical treatment."

The blue collar patients had difficulty visiting the Dispensary during working hours.  As a solution evening clinics were established here in January 1936 "for the benefit of low-salaried persons who may receive treatment at a nominal cost."  The cost was, indeed, nominal.  Visitors to the evening clinic, which was opened from 5:00 to 7:00 on Tuesdays and Fridays, were charged 50 cents.  Patients to the day clinic were charged 25 cents by now.

On August 15, 1949 The Times reported "A group of East Side residents is taking action to prevent the 150-year-old institution from closing its doors next Thursday...The basis for the suit, according to a petition by the residents, is that 'the sick, indigent poor served by the dispensary have a vested right in and to the benefits for which the dispensary was founded."

A satisfactory solution came in the form of the Judson Health Center, founded in 1921 in affiliation with the Judson Memorial Church on Washington Square.  The Center had been at No. 237 Thompson Street; but now, responding to a petition signed by 6,000 residents, it spent $35,000 to buy the vacant Dispensary building, and another $30,000 in renovating it.

On October 25, 1950 as renovations were nearly complete, The Times reported "Mothers wheeling baby carriages congregated in talkative groups yesterday before the building at 34 Spring Street, between Mott and Mulberry Streets.  They watched workmen chip away the stone legend 'New York Dispensary' above the door and prepare to put up painted bulletin boards reading 'Judson Health Center.'" 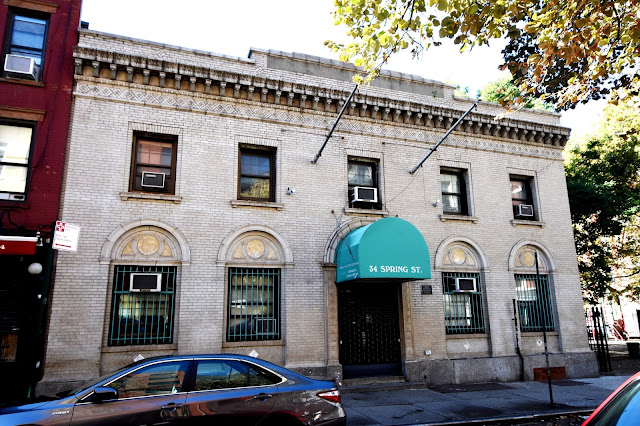 The Center still operates from the Spring Street building, more-or-less a neighborhood walk-in clinic.  While the neighborhood around Trowbridge & Livingston's attractive brick structure has greatly changed, the 1913 New York Dispensary building has not.