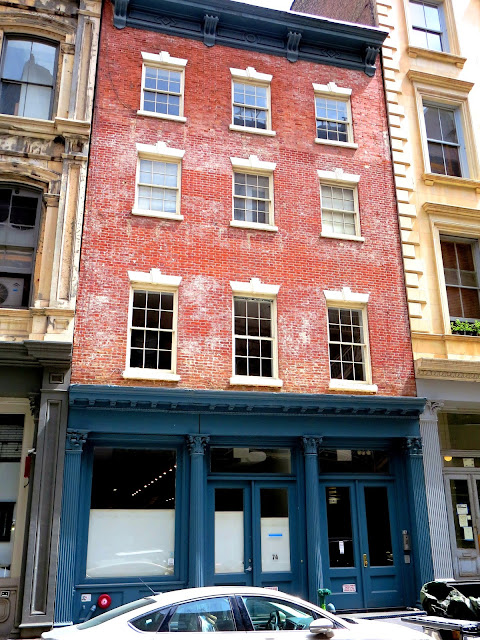 When John Wood erected his handsome Federal-style residence at No. 74 Franklin Street in 1815, the neighborhood was quiet and refined.  Wood’s home, 25-feet wide, was clad in brownish-red brick laid in Flemish bond.  Splayed stone lintels with layered keystones ornamented the openings.  Three and a half stories tall, the house marked the success of its owner.

In 1840, several blocks to the southeast, G. A. Bradbrook operated what he termed a “general and fashionable outfitting store” at No. 353 Pearl Street.   An advertisement that year in A. E. Wright’s Commercial Directory promised shoppers that he “Keeps constantly on hand the following articles, viz.—Shirts, Under Shirts, Drawers, Belts, Cravats, Bosoms, Stocks, Gloves, Hosiery, Handkerchiefs, Scarfs, Collars, &c, &c.  LINEN made to order in a superior style.”  Bradbrook was not interested in haggling with his patrons.  “No deviation from first price” said the ad.

As the years passed the commercial district inched northward and so did G. A. Bradbrook.   By 1851 his store was located just four blocks south of the former Wood home, at No. 297 Broadway.   Then two years later he had moved to No. 74 Franklin Street and the wealthy merchant set to work converting his property for his store.  In 1853 Tax Assessment Records reflect improvements and it was most likely at this time that the attic was raised to a full fourth floor and the cast iron shop front was installed.   Rather remarkably, while the architect added a modern Italianate cornice; he carefully reproduced the Federal-style lintels over the new openings.  Bradbrook’s rather common storefront with its fluted Corinthian columns was, nonetheless, pleasing.

The wealthy merchant maintained a country estate far to the north.  But in 1857 he decided to sell.  An ad in the New-York Tribune on Tuesday, May 26, 1857 offered “Beautiful Gothic Country Residence…Furniture, Horses and Carriages for sale.”  Bradbrook described the estate glowingly.  “The House contains 16 Rooms, with all of the modern improvements and outbuildings; a Garden well stocked with choice Fruits, and everything calculated for a Gentleman’s residence.”

Although the Bradbrook family would retain possession of the building for decades; it appears that by 1869 G. A. Bradbrook’s store was no longer here.  That year Bechel & Wolff “importers of French, German, and English fancy goods and corsets” was listed at No. 74 Franklin Street.

Around the same time the Wilsons—John, Richard and William—ran their operation here.  The three respected businessmen were all members of the Chamber of Commerce of the State of New York.

For several years Goodman & Lazarus, makers of umbrellas and parasols, had done business from No. 84 Franklin Street.  But by 1898 they had moved down the block to No. 74.   That year the firm had either a boom in production or a heavy turnover in workers.  It advertised on January 28 for “operators;” on February 6 for an assistant cutter; and two days later for a veteran cutter.

Goodman & Lazarus was a substantial operation, employing 11 men and 20 women in 1900, each of them working an average of 51 hours a week.

When the City of New York assessed No. 74 Franklin Street at $55,000 in 1906, G. A. Bradbrook was still listed as its owner.  The valuation would translate to a significant $1.5 million today.

Manufacturing umbrellas and parasols had made Joseph Lazarus a wealthy man.   By now he had moved his family into a spacious apartment at No.  200 West 111th Street on a block lined with similar upscale buildings.  On the afternoon of April 12, 1907 a maid answered the doorbell to find a young man at the door.

The maid explained that Joseph Lazarus was at his Franklin Street office, the children were away at school, and Mrs. Lazarus was out calling.  The visitor acted perplexed.  He told the servant that he had telegraphed Lazarus that he was coming to visit.

“I should have thought that he would be home to receive me.  Well, I may as well wait.”

Everything seemed plausible so the maid allowed the man to enter the parlor.  He picked up a picture from the mantel and said “How well the children look!”

He took off his overcoat, asked for a morning newspaper and settled in.  The maid returned to the kitchen, but a few moments later was called.  “Can I have a glass of water?”

When she brought the water he dismissed her saying “I will call you if I want anything else.”

About an hour later she stepped into the parlor to see if Joseph Lazarus’s nephew indeed needed anything else.  She was surprised to find he was not there and a search of the apartment showed that he had left.  “It also revealed that with him had gone a quantity of Mrs. Lazarus’s clothing and jewels, which had been in her room opening off the parlor,” reported The New York Times the following day.

“Thoroughly frightened,” the maid telephoned Joseph Lazarus who rushed uptown.   Detective Walsh arrived shortly afterward.  Lazarus gave the police a list of the missing items, which amounted to between $3,000 and $3,500.  Included were “a valuable Persian lamb coat belong to Mrs. Lazarus, a pearl and diamond ring, with five stones, a gold watch and chain, a second watch and chain marked with the initials ‘H.L.,’ a diamond and pearl locked and chain, a pair of diamond cuff buttons, and a string of matched pearls.”

Detectives wondered how the burglar had such intimate knowledge of the family.  At first Lazarus claimed to be at a loss to account for this.  He later broke down and admitted he suspected “the son of a prominent Harlem family, who disappeared from his home some weeks ago.”

The circumstances surrounding Lazarus and the youth seemed a bit questionable—possibly explaining the respected manufacturer’s reluctance to talk.

“This young man, Mr. Lazarus said, he had met at Asbury Park in Easter week and had become very well acquainted with him,” reported The Times. 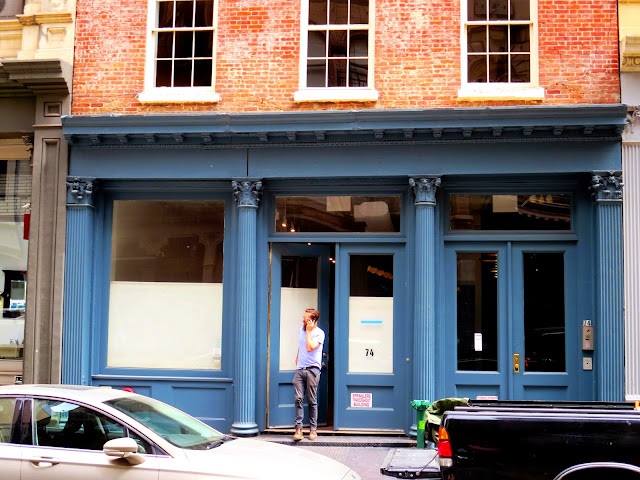 Joseph Lazarus’s bad luck returned four years later.   On Thursday November 16, 1911 he sealed a large business deal.  The banks were already closed so he stuffed $6,000 in cash and $15,000 in certified checks and notes into his wallet and headed home.

He told his wife of the huge transaction and offered to take her out on the town to celebrate.  When the couple left the apartment, he still carried the cash-laden wallet with him.

Lazarus and his wife enjoyed a night at the theater followed by dinner at the Hotel Traymore on West 58th Street.  When they arrived home he realized his wallet was gone.  After tossing and turning throughout the night, he called an emergency meeting of the members of his firm the following morning.

While the conference was going on, the telephone rang.   Gus Schnabel, manager of the hotel, had called to notify Lazarus that a waiter had found his wallet under the table.  “Shall I send it down?”

Lazarus instructed Schnabel to messenger the wallet to him and carefully took down the waiter’s name.  When he received the wallet—containing the full $21,000 in cash, checks and notes—he sent a letter back to the hotel.  It included a $500 for the waiter, Philip Loew—a tidy reward of nearly $13,000 today.

Ironically, no one at the hotel, including the waiter, had bothered to look into the wallet other than to pull out Lazarus’s business card.

Throughout the next seven decades the building would house dry goods firms, like Melville L. Levy, “cottons,” and Phoenix Linen Corp., importers and jobbers, who were here in the 1920s.   The former house saw rapid turnover of owners at mid century.  Between 1944 and 1948 it was sold four times, and again in 1956 when the Manhattan Textile Import-Export Company purchased it.

In 1998 the building was converted to residential space on the upper floors and showroom space at ground level.  Today John Wood’s 1815 home is the last recognizable relic of Franklin Street’s far distant residential past.