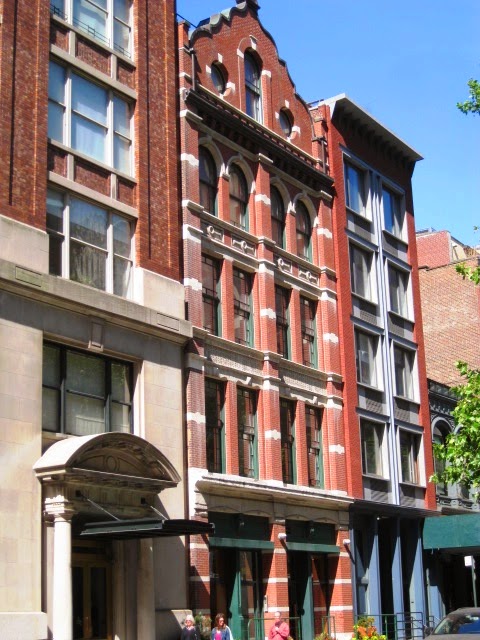 In 1852 Hungerford's Hotel not only housed travelers; but was home to full-time residents like Magdaline Kessler, the widow of George P. H. Kessler.  She lived with her grown daughter Elizabeth who made her living as a milliner at No. 271 Greenwich Street.  The hotel was composed of four older structures, Nos. 164 to 170, combined internally.

Four years earlier, on April 1, 1848, teenaged sisters, Kate and Margaret Fox, claimed they had communicated with a man who years earlier had been murdered in their house.  It was the start of the rampant Spiritualist Movement and in February 1853 it visited Hungerford’s Hotel.

New York newspapers excitedly reported on three spiritualists who checked into the hotel that February.  The New-York Tribune wrote “Three mediums on a spiritual mission to this city for a few days, [are] now stopping at Hungerford’s Hotel, in Duane-street, near Hudson-street.  They will examine diseases and prescribe for the same.  Price $2; for spiritual investigations $1.”  (The fees for the readings would be about $65 and $32.50 today.)

After investigating noises for a client, one of the mediums, H. Burkhart, told a Tribune reporter, “I feel it my duty as a medium to state to the public that I have investigated the spiritual rappings, and do say that it is spirits, and can prove it to any reasonable mind, at No. 168 Duane-street.”

By the end of the Civil War Hungerford’s Hotel had become the Mercantile Hotel.  On September 27, 1865 The New York Times advised its readers “But few persons are aware of the existence of an organized club of checker or draught players in this city, but such is the case, and they have rooms well supplied with tables and men at their rooms, in the Mercantile Hotel, No. 168 Duane-street, where they meet every Monday, Wednesday and Friday nights for play.”

The patchwork hotel would last another two decades.  Then, as the neighborhood became heavily commercial, the properties that made up the hotel were sold off.  In 1886 No. 168 Duane Street was owned by Fleming Smith.   Five years in the future he would commission architect Stephen Decatur Hatch to design a sprawling and exuberant Flemish Revival warehouse at No. 135 Watts Street.  But for now he would hire the architect to produce a toned down version at No. 168. 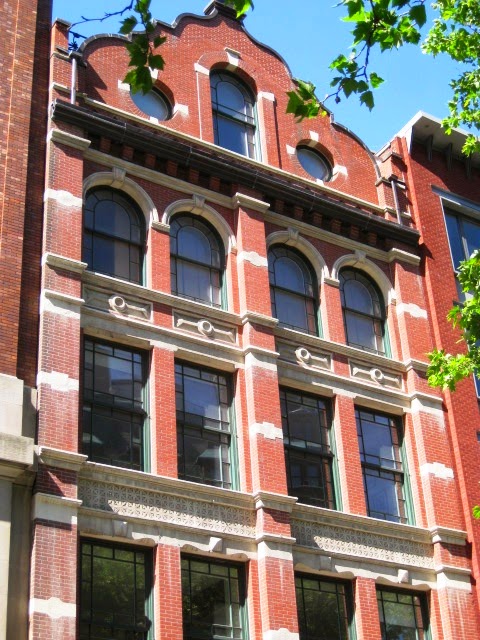 The five-story store and loft building was completed in 1887.   The Flemish Revival style—a nod to Manhattan’s Dutch heritage—was just emerging and Hatch splashed it with elements of the equally fanciful Queen Anne style; the multi-paned openings, the cross-hatching between the second and third floors, and the foliate carvings over the first story openings, for instance.   But the Northern Renaissance Revival, or Flemish, style maintained command with the undulating fifth floor gable.

Among the first tenants was The Kaskine Co., makers of Kaskine tonic.  An advertisement promised it “is the only medicine in the world that destroys the germs of disease in the blood, and permanently cures all diseases arising therefrom, such as Malaria, Favors, Rheumatism, Biliousness, &c., and is the GRANDEST TONIC EVER DISCOVERED.”
The 49-year old wholesale tobacconist and cigar dealer John A. Belvin had moved his operation into the building by 1889.  On November 30 that year he left the office for lunch, telling his employees he would be back in half an hour.  Before leaving he took $150 in cash; the amount he was accustomed to carry around.   The office workers were surprised, but not alarmed when he did not return.

Over a week later, on December 9, The New York Times reported “Mr. Belvin lived in a handsome house at 372 Halsey-street, Brooklyn, and when he did not return to his home one of his sons notified Inspector Byrnes of his disappearance.”  Belvin lived in the house with his wife and six children.  The Inspector had put a detective on the case, but there was no trace of him.

Family members were concerned because of the large amount of jewelry Belvin wore and they “feared that he may have met with foul play.”   His wife had a somewhat fantastic theory.  “Mrs. Belvin said last night that her husband might have gone to see a friend off on some steamer, and have been carried to sea,” said The Times.

The mystery was only partially solved on December 13, two weeks after Belvin’s disappearance, when he returned home.  The New York Times reported “One of his sons said yesterday that Mr. Belvin was unable to tell what had happened since he left his store at noon on Nov. 30, except that on Tuesday last he found himself in St. Augustine, Fla.  He wrote home at once, and the letter was received on Thursday.”

After mailing the letter, Belvin boarded a train to Brooklyn.  “Young Mr. Belvin denied that his father had ever had any mental trouble, and professed to be ignorant of any motive for his going away.”

Other than Belvin’s tobacco office, the tenants tended to be engaged in foods or medicines.   Knapp’s Extract Company manufactured concentrated root beer syrup; and the Pre-Digested Food Co. made and sold Paskola, a “pre-digested starch food.”  An article in The New York Times on February 10, 1894 remarked “Comparatively few people outside the highest medical circles know of this wonderful discovery, but it is known to possess the qualities of flesh-forming, strength-imparting, life-giving power which has never been known before in the history of the world.”

The firm quoted an anonymous doctor “situated in one of the best parts of Fifth Avenue,” as saying “This wonderful preparation is taken during the meals just as it is put up…It requires no digesting when it enters the stomach.   In this way Paskola imparts strength to the weak, and makes thin, fragile persons plump and robust.”

In 1902 Mother Siegel’s Syrup Co. moved in.  Incorporated in December 1901, the firm was connected with the A. J. White Company, Ltd. in London.    In listing the officers of the firm in 1904, the American Newspaper Publishers’ Association’s Bulletin noted “All connected with the above are people of high standing.”

The sales offices of Worcester Salt Company were in the building by 1908.  Its salt works were located at Silver Springs, New York, and that year it produced 500,000 barrels of salt.   An advertisement in Chicago’s Dairy Produce in 1911 boasted “It takes the best to make the best.”

The salt firm’s choice of location made perfect sense; for by now the area was filling with the city’s egg and butter firms.  Another advertisement promised dairy merchants “The quickness with which Worcester dissolves protects you against mottled butter and then, too, the peculiarly clean, sweet flavor of Worcester Salt is a decided factor in making it the choice of all buttermakers.” 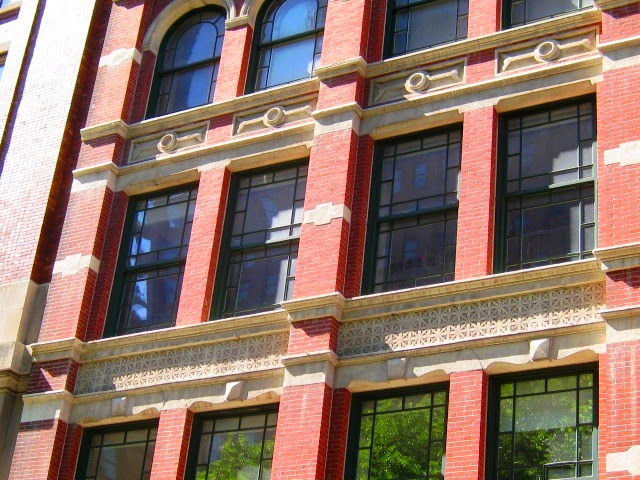 By 1910 Manley & James, manufacturers of proprietary medicines and preparations had joined Worcester Salt, Mother Seigel’s Syrup, and Knapp Extract in the building.   They would all still be here at least through 1912.  But in 1915 No. 168 had an especially unlikely tenant—electrical engineer and manufacturer of wireless apparatus William Dubilier.

Dubilier was sent to France in 1915 to help the British and French Governments develop submarine detectors.   “They had already succeeded in detecting a submarine’s approach at a distance of five miles, but were bothered by other sounds under water.”  Dublier and another scientist were successful in filtering out the sounds of large vessels.  By the time he returned to New York “we were able to detect the presence of a submarine fifty miles away,” he told reporters.

William Dubilier came home to work at No. 168 Duane Street on another project.  “He has returned to make a wireless apparatus with a low aerial for use in the trenches,” reported The New York Times on October 2, 1915.

Following the war, the building was filled with a variety of dairy and food firms—Ficken, Ullman & Co., butter dealers; dairy agents H. W. Bender Co., who represented firms like the MacLaren Imperial Cheese Co. of Detroit; A. J. White Ltd, patent medications; and Carvalho Cap & Closure Co., manufacturers of bottle caps were all here in 1918.

The Pharmacal Advance was published from No. 168 Duane Street by 1920. Called “A Journal devoted to Progressive Pharmacy and Practical Therapeutics,” it printed articles on issues like Chinese medicine, wound dressings, preventing goiters, and ringworm.  It also liberally advertised for other tenants of the building; suggesting that it was a joint publication.

In May 1920 the second through fourth floors were vacant—the rent for each advertised at $7,500 per year.   But they did not remain vacant for long.  Juan A. Babcock, wholesale butter and eggs merchant moved in that month.    The building was now filled with butter and egg dealers; Ficken, Ullman & Co. was still here, having changed its name to Ficken, Coffin & Co. in 1919.

In the early 1930s Carl Ahlers, Inc. a “poultry, butter and egg concern,” moved in.  In the fall of 1945 the Ahlers business and, indeed,  the cherished tradition of thousands of Americans was in jeopardy.    A push was made by the International Brotherhood of Teamsters and Chauffeurs in mid-November to unionize the employees of Carl Ahlers, Inc.

When things did not progress as the union demanded, it picketed the Delaware, Lackawanna & Western Railroad pier at Cortlandt Street.  Shipments into and out of the facility ground to a halt.  A week later it appeared that more than 10,000 turkeys would not make it to the first Thanksgiving dinners since the end of World War II.

At the eleventh hour the union caved.  Arthur Dorf, secretary-treasurer of Local 202 told reporters “We are lifting the picket lines for the sake of the public so they may enjoy the first real Thanksgiving in years.”  But he added a veiled threat.  “We will return soon, stronger and better than ever.”

Carl Ahlers, Inc. remained in the building until the early 1970s.  By now the Tribeca neighborhood was changing from the egg and butter district to one of trendy restaurants and high-end residences.

In May 1987 Meile Rockefeller, the great granddaughter of John D. Rockefeller, Jr., announced that her conversion of No. 168 Duane Street to upscale condominiums was nearly complete.  The 31-year old, who said “from very early on I wanted to build,” created six units designed by John T. Fifield Associates, completed in 1989. 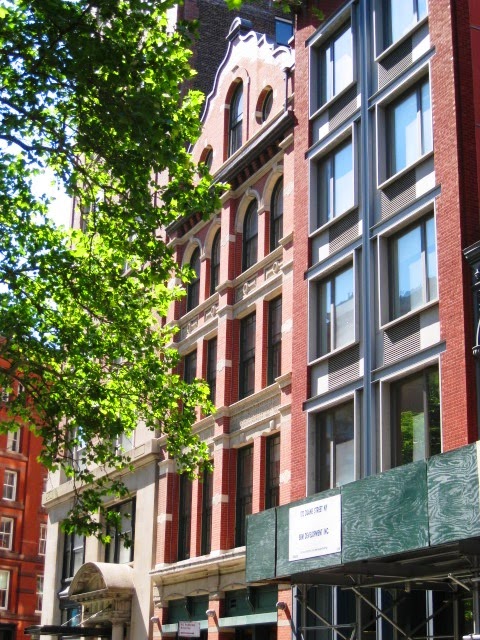 Stephen Decatur Hatch’s distinctive Flemish structure is as charming and eye-catching today as it was in 1887—a successful recycling of an architectural delight.