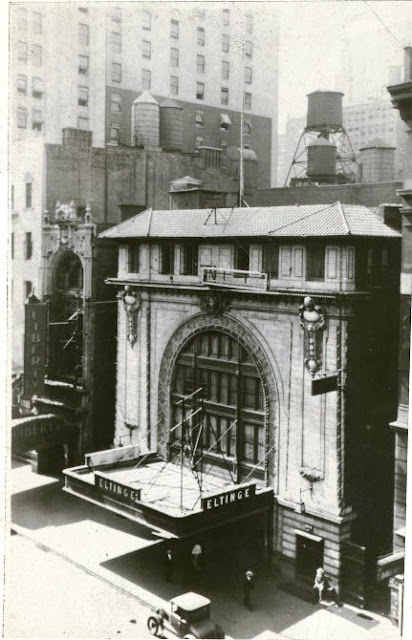 Photo NYPL Collection
﻿
Thomas W. Lamb had already established himself as a respected theatre architect when, in 1911, producer and manager Al Woods commissioned him to design a new 42nd Street theatre. Julian Eltinge was, at the same time, the premier female impersonator in the country, having plays written for him and earning one of the highest salaries in the entertainment business. Eltinge had been largely responsible for Wood's success and wealth and, out of appreciation, the new theatre was named “The Eltinge.”
The new theatre opened on September 11, 1912. Its restrained Beaux Arts, white terra cotta façade was dominated by an immense arched window, several stories high. Inside, a mural by French artist Arthur Brounet adorned the lobby. The auditorium was decorated in an Egyptian theme, which both pleased and displeased the critics of the day.
One reported “The interior is artistic. The dome and sounding board contain Egyptian paintings. The color scheme of the auditorium is Egyptian, and the walls are of a gold brown…” Simultaneously the critic for The New York Times remarked “What the designer intended when he decorated the boxes with bacchanic figures wearing Egyptian headdresses and playing pipes can only be imagined.”

The opening production, Within the Law, starred Jane Cowl. Despite the pedantic warnings of The New York Times theatre critic, it ran for 541 performances.

"How [Al Woods] dared have the play performed during the present demoralized condition of the police force is a matter he must settle with his own conscience,” chided The Times. “The worst of it is that everybody in New York will go to see the play, and it must not surprise any high school girl’s parent to have his daughter carrying out some perfectly heinous scheme with the excuse that it is ‘within the law.’”

While The Times critic panned the play, he found the auditorium “to be a commodious, well-arranged affair.”

The Eltinge was a small theatre, having only 759 seats, but it presented the greatest names in the theatre. Two years after its opening John Barrymore starred in The Yellow Ticket. In 1929 Laurience Olivier made his American debut in Murder on the Second Floor and in 1930 Love, Honor and Betray opened with Clark Gable and Alice Brady.

Not everything went smoothly for The Eltinge and Al Woods during this time, however.

In 1915, two years before the U.S. entered World War I, an audience of German-Americans crowded into the Eltinge to hear B. Herman Ridder speak of the war from a German point of view. “It is remarkable,” he told the audience, “how much misunderstood Germany is in this country today. The ignorance of the average American is amazing.”

The "average American” reading the account as published in The New York Times was irate.

On November 22, 1921 Police Commissioner Gilchrist order the theatre to be shut down, calling the play The Demi-Virgin “indecent.” A highly-publicized media battle between Gilchrist and Woods ensued; Woods refusing to shut down, saying that the police commissioner had the right, by law, to shut down a motion picture but not a play. The manager distributed pink slips of paper to the audience asking their opinion as to whether the play was indecent or not.

In the end, Woods won the battle after about a week of arbitration and the play never faltered.


With the onslaught of Great Depression the Times Square theatres suffered financially. By 1931 Al Woods could no longer hold onto his Eltinge. On February 26 of that year The New York Times reported that Woods subleased it to Max Rudnick for two years. “Following the recent example of the Republic, another legitimate theatre in West Forty-second Street,” the article said, “will be converted into a burlesque house.”
Rudnick’s idea of entertainment was far removed from the legitimate theatre produced by Woods. Although some of the acts were tame – Jackie Gleason got his start here and in 1935 Bud Abbot and Lou Costello met doing separate acts – the strippers went too far as far as local politicians were concerned.

On November 17, 1934 seven female performers, along with the manager and assistant manager, were arrested during intermission, charged with indecent performance.

Mayor Fiorello LaGuardia, bent on closing all the burlesque houses, finally closed down the Eltinge in 1937, along with fourteen other such theatres that same day.

After being boarded shut for five years, the Eltinge was converted to a movie theatre, opening in 1942 as Laffmovie, a first-run movie house. By 1954 the 42nd Street neighborhood had declined. The theatre was renamed The Empire, a “second-run grind house” screening grainy pornographic movies. By mid-1980s the seedy neighborhood made survival impossible and the theatre was closed for good.

In 1992, the exterior of the vacant Empire was used in the filming of Columbia Picture's Last Action Hero starring Arnold Schwarzenegger. 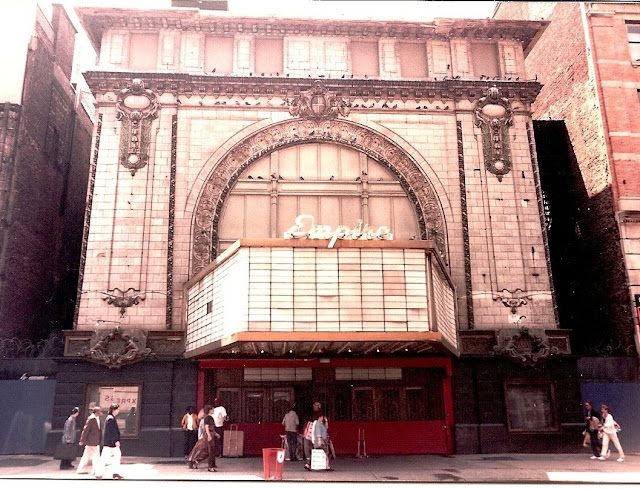 The Empire - 1992   Photo Ken Mac greenwichvillagenydailyphoto.blogspot.com
Things began improving for 42nd Street in the mid-1990s with the Times Square Redevelopment Plan. Tax breaks and assistance from the city encouraged concerns like Disney to invest heavily in the renovation and restoration of historic Times Square properties.

The Empire sat, problematically, squarely in the center of the site of the $160 million project. Developer Bruce Ratner had a choice to make. His firm had already decided to preserve the Empire rather than demolish it, using the façade as the western entrance – down the street from where the theatre sat. The terra cotta façade could be dismantled and reconstructed, or for about the same cost he could move the entire structure.

Ratner chose to move it.

Frederick Bland, Partner in Charge of the project for Beyer Blinder Belle, the firm commissioned to design the new structure, was pleased with the decision. It was “a much more interesting and historically legitimate approach to preserving the structure.”

Besides, he told The Daily News, “it was more fun.”

Photo Dan Hogan Charles - The New York Times
After the Urban Foundations/Engineering workers spent three months of welding steel beams to the supporting walls and columns, then constructing an interlocking platform below, on March 2, 1998 the old theatre began its move to the west. The Daily News reported that “The historic Empire Theatre all 7.4 million pounds of it inched down W. 42nd St. at less than a foot per minute along eight rails stretching west to its new home 168 feet away, near Eighth Ave.”

Heymi Kuriel, vice president of Urban Foundation explained the caution that was required. “Everything had to be perfect. Every bolt had to be tested.”

The Daily News said “It took about four hours to shuttle the 86-year old former burlesque house…Scores watched from across the street as giant balloons of Abbott and Costello … led the move, appearing to tug the historic Empire to its new spot.”

The cost to move the theatre was $1.2 million.

Today the historic façade is essentially intact behind a new neon marquee. Inside Brounet’s mural has been restored by Harriet Irgana, director of Rustin Levenson Art Conservation. 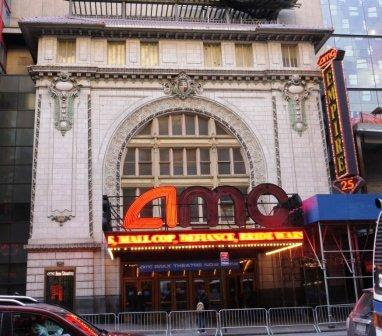 While the old Eltinge had 759 seats, the AMC Empire boasts 4,916 seats in 25 auditoriums. Part of the proscenium of the old Eltinge remains, a reminder of the glorious days of the theatre a century ago.