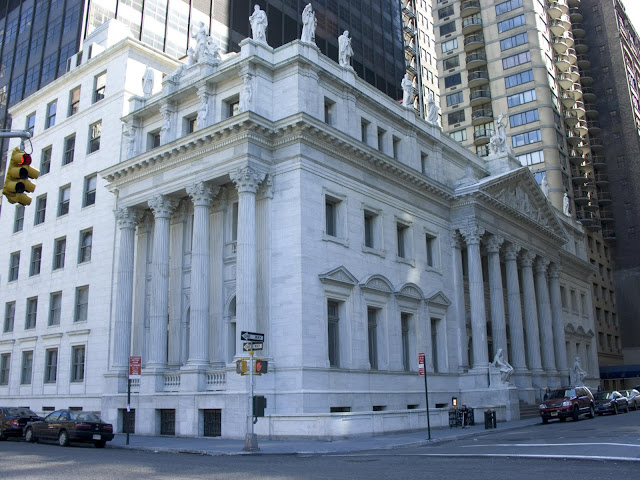 On June 28, 1895 when The Sinking Fund Commission met in the Mayor’s office, it was agreed that the new Appellate Court, established a year earlier, would hold session in rented rooms on the third floor of the Constable Building. At the same time the committee appointed to recommend a site for a new courthouse reported on their surprising choice: the lot at the corner of Madison Avenue and 25th Street, surrounded by posh homes of the city’s gentry.

At $370,000, the site was considered extravagant, especially by Commissioner Finch, and a new committee was formed to discuss the matter. Despite the cost of the land and protests from wealthy homeowners, the site was approved. To appease the neighboring mansion owners, the courthouse would be designed to meld into its environment – a low, stately structure intended to impress but not overpower. 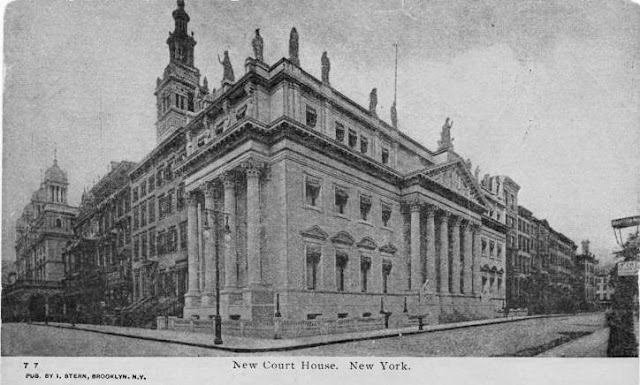 The Courthouse in 1899, surrounded by brownstone residences.

A year later designs were approved and on July 1, 1896, The New York Times reported on the newly planned Appellate Courthouse. “On this ground, at an estimated cost of $650,000, will be placed an imposing and ornate structure of pure white marble from designs prepared by James Brown Lord. 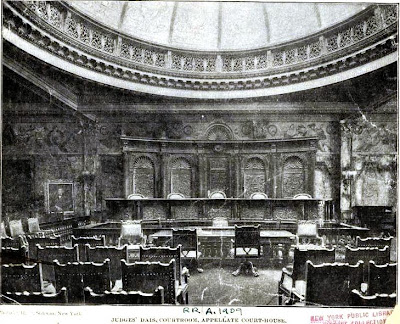 
“The courtroom will occupy the main portion of the first floor. It will be a handsome chamber, 46 by 68 feet, with a ceiling 18 feet in height….The second floor will be 14 feet in height and will contain the library, the Judges’ private rooms, toilet rooms, attendants’ rooms, and rooms for stenographers…The third story will contain one Judge’s private room, for which space could not be found on the second story; toilet rooms, a ladies’ toilet room, janitor’s apartments, and storage rooms. On this floor there will also be a complete men’s outfit for the Judges including a dining room, kitchen, and pantry.

“The details of the interior decorations have not yet been fully worked out, but there will be plenty of marble statues and bas-reliefs from the indications in the drawings.”

Indeed, there would be “plenty of marble statues” inside and out. 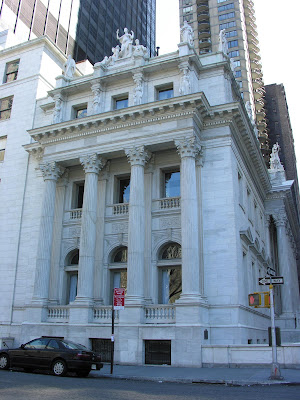 The courthouse opened with a private viewing for the press and dignitaries on December 20, 1899. James Lord and his wife received the guests at the door as though it were their home and personally led the tour. The combination of architecture, function and art was not lost on The New York Times reporter. “It therefore emphasizes the growing understanding in this country of the fact that ‘the house’ to be truly ‘beautiful’ requires and demands the co-operation of the allied arts.” 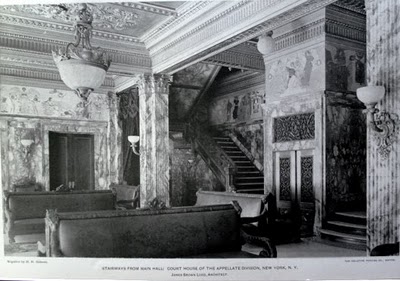 Lord had been given free-reign in choosing the artists and sculptors who decorated the building, which The Times called “one of the most chaste monuments of art in the metropolis.” Sixteen sculptors – sponsored by the National Sculpture Society and among of the most esteemed of the day – worked on the thirty 12-foot marble statues on the façade, the most ever to work on a single building in the United States. Inside, ten renowned artists created murals for the courtroom and main hall. Herter Brothers made the custom furniture.

Fully one-third of the $700,000 cost of the building was spent on statues, murals and other decorative features. 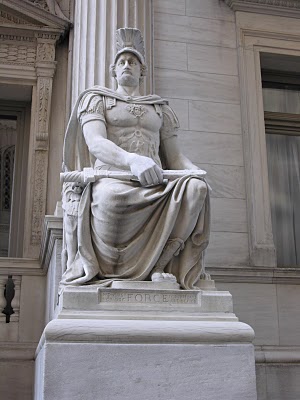 When James Lord died in 1902, his obituary noted that “The building is said to be the first ever constructed in America in which the architect had the entire control of the sculpture and mural decorations, as well as the construction of the building.”

In 1953 a $1.2 million restoration of the façade was undertaken by the Department of Public Works during which the huge marble statues were removed and cleaned. It was at this time that the general public first realized one of the lawgivers was Mohammed. Representatives from Pakistan, Egypt and Indonesia petitioned the State Department to destroy the statue rather than restore it, citing Islamic canon that forbids the depiction of human beings in painting or sculpture.

When the statues were replaced in 1955, each was moved over one spot to fill in the void where Mohammed had stood. Today there one empty pedestal remains. 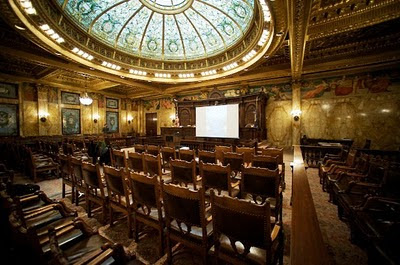 At the same time a five-story addition was erected behind the courthouse, carefully avoiding any disturbance to the original building. On the addition, a Holocaust Memorial was included; a marble plaque of Auschwitz as seen from above in a World War II reconnaissance photograph. Inscribed in the stone is “Indifference to Injustice is the Gate to Hell.”


The exterior of the Appellate Court was designated a landmark by the New York City Landmarks Preservation Commission in 1966, the interiors were landmarked in 1981, and the building was included on the National Register of Historic Places in 1982. 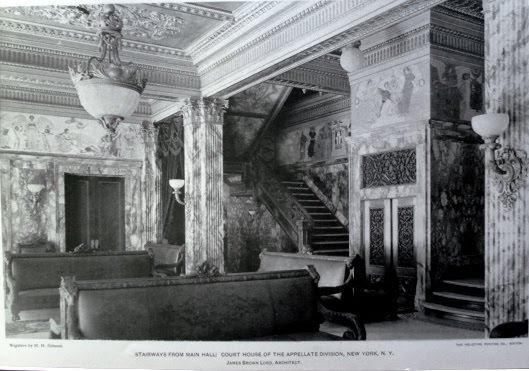 Today the interiors are nearly untouched, other than the addition of 21st Century technical updating. The vast stained glass dome over the courtroom, the gilded coffered ceilings and the Sienna marble walls look as they did when James Lord led the press through in 1899. Outside air pollution is eroding the irreplaceable rooftop statues, but over all the Appellate Court remains an architectural and artistic treasure.

The Appellate Courthouse is not open to the public.
Posted by Tom Miller at 2:26 PM