In the last half of the 19th Century, the area on the Lower East Side east of the Bowery was home to the immigrant German population of New York.  Called Kleindeutschland, or "Little Germany," by the 1880s there were 250,000 German-speaking residents here; approximately one-fourth of the total city's population.  James D. McCabe, Jr. described life around the Bowery in his 1882 New York by Gaslight:

"The population of the street is largely German, and at night and on holiday occasions the Bowery constitutes the favorite resort of the pleasure-seekers of this nationality.  German restaurants, beer saloons and gardens, theatres and music halls, abound here; the signs are German, and the dishes in the eating-houses the same.  You may go for squares sometimes without hearing an English word spoken."

It was in this neighborhood that Carl Goerwitz decided to open a new rathskeller.  Goerwitz had already owned and run a restaurant and a saloon further uptown.  He obtained a lease in 1885 on the building at 194 Third Avenue and a single-story stable behind it at 143 East 17th Street which he replaced with a new one-story structure, operating a beer hall out of both buildings.

But Goerwitz had bigger plans.  Nine years later, he took over the lease on 190 Third Avenue.  He commissioned German architect Henry Adam Weber to give the complex a make-over.  The facade was stripped off and replaced with a terra-cotta facing above the street level, creating a near-replica of Heidelberg's 17th Century Freidrichsbau.  The interiors were revamped.  A sky-lit dining area now connected the 17th Street building with the Third Avenue building.  Goerwitz established his beer hall in the Third Avenue side and a large room for family events on the 17th Street side.

Weber's enthusiastic German facade with its scrolled gable and intricate cast iron first floor ornamentation immediately attracted the locals.  Goerwitz named it "Scheffel Hall" in  honor of the German poet and novelist Joseph Victor von Scheffel who had written a collection of student songs, scenes from which decorated the walls.

In 1904 Goerwitz turned the business over to his former employee, Fred Ahrens who immediately tried to buy out the restaurant next door, Allaire's.  When William Allaire held out, Ahrens simply sold the business to him.  Allaire joined the buildings, creating a saloon, restaurant, and party hall complex with, according to advertisements, "high class music every evening."

In 1909, O. Henry used Scheffel Hall as the setting for his short story "The Halberdier of the Little Rheinschloss," describing its "smoky rafters, rows of imported steins, portrait of Goethe, and verses painted on the walls."


Beginning in 1928 the building passed through several hands, thankfully none of whom altered the building significantly.  In 1936 Joe King and Jack Lichtenberg took over and Joe King's Rathskeller became a college haunt.

According to one former West Point cadet, "Generations of cadets in the era from the late thirties to the late sixties spent at least one weekend night at Joe King’s Rathskeller, drinking outsize mugs of beer and engaging in community singing, long before the advent of Karaoke.  There...surrounded by ornate beer steins, college pennants, framed theatrical programs and photographs of stars, past and present, great and near great, and walls painted with European scenes, groups of cadets from West Point vied with groups of students from other institutions of higher learning...in song volume and earnestness of purpose." 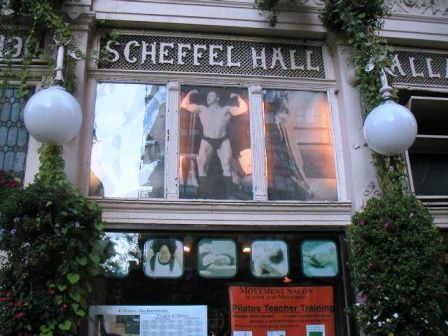 Today Carl Goerwitz's fanciful German rathskeller looks very much as it did when Kleindeutschland was thriving and German was more common that English.  Amazingly the original Sheffel Hall and Allaire's signs still remain.  Most likely the earliest example of terra-cotta cladding in New York, Sheffel Hall was given landmark status in 1997; not only for its significant architecture but for its importance in local German-American history and subsequently in American musical and literary history.
Posted by Tom Miller at 2:51 AM