When Captain Joseph Rose built his red brick Georgian home at 273 Water Street on or around 1773, long before landfill widened the island, the river ran just behind the property.  Here Rose and his neighbor, William Laight, shared a pier where they docked their brigs.  Rose's ship, the Industry, imported expensive lumber for his Honduras mahogany trade. 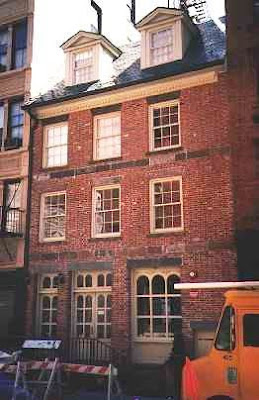 Similar merchant class homes lined the streets of the neighborhood on Water between Dover Street and Peck Slip.  Rose's fashionable, wide home with the dormered attic spoke of his success.

In 1791 Joseph Rose and his family moved to Pearl Street, leaving the Water Street property to his son.  After the beginning of the 19th Century the street level of the Water Street house was converted to commercial use; first as a cobbler shop, then an apothecary, and before the Civil War, a boardinghouse.  By then the neighborhood had substantially declined and Water Street had earned the reputation as a "sea of wretchedness and sin."

James D. McCabe described Water Street in 1882, "Strains of music float out into the night air, and about the doors and along the sidewalks stand groups of hideous women, waiting to entice sailors into these hells, where they are made drunk with drugged liquors, robbed of their money and valuables, and turned helpless into the streets.  Groups of drunken and foul-mouthed men and boys lounge about the street, bandying vile jests with the women, and often insulting respectable passers-by."

In 1863 Christopher Burns, also known as Christopher Keyburn, purchased 273 Water Street, starting a chapter in the building's existence that sounds like a scene from Charles Dickens.  The 33-year old Burns was known as "Kit" and had been one of the founders of the Dead Rabbits gang.  He opened a dance hall in the house called "Sportsmen's Hall" where he offered a variety of distractions -- gambling, bare knuckle boxing, dancing, drinking, but most notoriously, rat and dog fights.

Burns kept a stable of terriers caged in the basement.  Large burlap bags of brown wharf rats were brought in and released in an 8-foot square rat pit constructed in the center of the tavern.  The pit was lined in zinc and surrounding it tiered benches gave the patrons a good view of the show.  Bets were made on how quickly a dog could kill 100 rats (the record was less than 12 minutes).  Patrons paid from $1.50 to $5.00 admission -- about what a skilled laborer earned in a day.

Edward Winslow Martin wrote of Sportsmen's Hall in his 1868 Secrets of the Great City.  "It is simply sickening.  Most of our readers have witnessed a dog fight in the streets.  Let them imagine the animals surrounded by a crowd of brutal wretches whose conduct stamps them as beneath the struggling beasts and they will have a fair idea of the scene at Kit Burns."

James McCabe noted "Some of the men will catch up the dog in their arms, and press it to their bosom in a frenzy of joy, or kiss it as if it were a human being, unmindful or careless of the fact that all this while the animal is smeared with the blood of its victims. The scene is disgusting beyond description."

Making the evening even more macabre was Burn's son-in-law, Jack the Rat.  Between rounds he would jump into the pit and for a dime would bite the head off a live mouse.  For a quarter he would do the same with a rat.

In the late 1860s local Christian reform ministers targeted Water Street as a high profile arena for their good works.  They would take over the barrooms in the afternoons for prayer meetings.  Sportmen's Hall was among those and because of that the preachers loudly proclaimed that they had converted Kit Burns.  In actuality, Burns was charging them $150 a month for the space for one hour a day from noon to 1:00.

In 1870, after an intense campaign waged by Henry Bergh who would later found the ASPCA, Sportsmen's Hall was closed down.  Kit Burns, in an ironic twist, leased the building to the Williamsburg Methodist church as a home for fallen women.  He immediately opened a new rat pit at 388 Water Street.

On February 7 the building was dedicated.  The Times reported "The haunt at No. 273 Water Street, known as "Kit Burns' Rat Pit" which has been hired by Rev. Wm. H. Boole...for a mission and a home for the reform of abandoned women, was yesterday dedicated...A great many of the denizens of that region gathered about the entrance and Kit and his companions...freely expressed their disgust for the whole proceedings."

Before the year was out, Kit Burns died, not yet 40 years old.

In 1904 a fire damaged the structure after which it was used as a warehouse.  Then in 1974 another fire gutted the building.  Two years later the city siezed it for back taxes and it sat abandoned, an empty shell, for two decades.

Developer Frank J. Sciame, Jr. of Sciame Development Company purchased the house in 1997 for a total cost of $1.00.  Working with architect Oliver Lundquist, Sciame put $1.1 million into the renovation of the old building -- the third oldest structure in Manhattan.

Completed in 1998, the renovated house now has four luxury apartments.  Today, in the house where Jack the Rat bit off the heads of live rodents, apartments are selling for just over $1 million.
Posted by Tom Miller at 2:45 AM