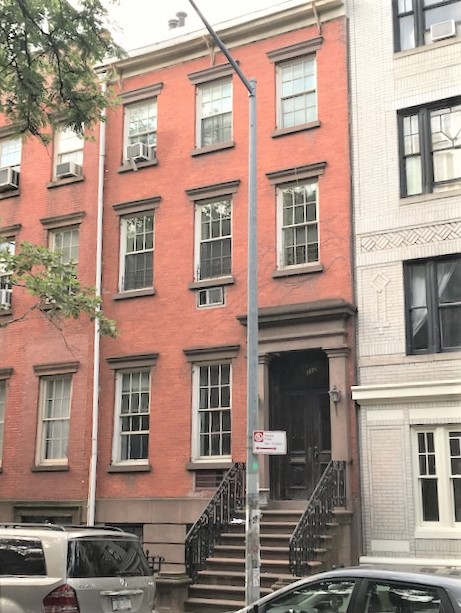 At the same time that Clement Clarke Moore began dividing his family's estate, Chelsea, into building plots, wealthy stone merchant Bezaleel F. Smith was branching out into real estate development.  On April 25, 1835 he purchased six 25-foot wide lots from Moore.  His row of speculative houses, stretching from No. 326 to 336 West 22nd Street was completed in 1841.  The homes were designed in the popular Greek Revival style currently taking the city by storm.

Like its identical neighbors, No. 332 was three stories tall above a brownstone-faced English basement.  The superb Greek Revival style iron railings terminated at the bottom of the stone stoop with what most likely were elaborate cast iron basket newels which sat upon the brownstone pedestals which survive.


The three brick-faced upper floors were trimmed in brownstone.  The entrance enframement, typical of the style, included Doric pilasters and a robust entablature.  The six-over-six windows wore molded stone lintels.

Bezaleel F. Smith retained ownership of the house, leasing it to well-to-do tenants.  In 1871 Jacob Daniel Temple Hersey, who had been living on Mercer Street, signed a lease.

Born in East Bridgewater, Massachusetts in 1821, Hersey's father, also named Jacob, was reputedly the "first manufacturer of tacks and straw goods in this country," according to the New-York Tribune later.  In 1846 Jacob established his own straw goods factory in Munson, Massachusetts.  It was, at the time, the largest such operation.  ("Straw goods" covered a variety of products, but mostly referred to the summer headgear worn by both men and women.)

When he and his wife, the former Marcia E. Pennell, came to New York, Hersey continued operating his Massachusetts factory, but branched into the brokerage business as well.  When he moved into the 22nd Street house he was a partner in Hodges, Hersey, & Co.

The couple had a son, Arthur Temple, and a daughter, Rebecca Ellisa.  The family became members of the First Presbyterian Church, on Fifth Avenue at 12th Street where eventually Jacob would hold the post of president of the board of trustees for years.  By 1875 Hersey had ceased to use his first name professionally, going instead by J. D. T. Hersey.  A highly respected businessman, he was elected a member of the Chamber of Commerce that year and in 1883 was elected president of the American Strawgoods Association.

Following the death of her husband, the Rev. Austin S. Dean, Marcia's widowed sister, Rebecca M. Pennell Dean, moved into the house.  She died on March 5, 1890 and her funeral was held in the parlor two days later.

The Herseys apparently took in a boarder shortly afterward.  Henry R. Arnold was living with the couple in 1893 when he suffered a near-fatal accident at Union Square.  At around 5:30 on the afternoon of September 25 he was crossing Broadway at 15th Street, an intersection that had become notorious for streetcar accidents, several of them deadly.

The Evening Telegram said he stepped into "the fatal Union square crossing" when "cable car No. 27 came along at the usual breakneck speed and struck him.  The unfortunate wayfarer was knocked senseless."  He was taken to New York Hospital but luckily seemed to be mostly unharmed.  "As soon as Arnold recovered from his shock he expressed a desire to go home; there being no apparent injury the physician let him go."  The incident no doubt provided animated discussion around the dinner table in the Hersey house that evening.

The 22nd Street house was the scene of an outpouring of warmth on November 27, 1900.  The New-York Daily Tribune reported "Golden weddings are always interesting, and many friends of Mr. and Mrs. J. D. T. Hersey, of No. 332 West Twenty-second-st., offered their congratulations on that anniversary...Flowers, music and supper aided in the festivity."

It would be one of the last of the parties held in the Hersey home.  On the morning of April 22, 1902 Jacob suffered a fatal heart attack at the age of 80.  His funeral was held at First Presbyterian Church three days later.

In 1904 the Herseys' daughter donated a stained glass window in memory of her father to the church.  Designed by Frederick Stymetz Lamb of the studios of J. & R. Lamb, it consisted of three lancet panels, the central one depicting David bearing a harp.  The inscription reads:

Marcia soon moved to the Upper West Side.  Following her death in 1911, Rebecca commissioned another memorial window for this First Presbyterian Church.  This one in honor of both her mother and her brother. 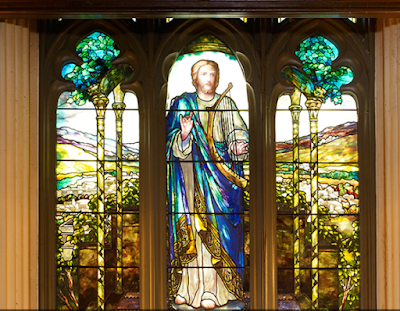 Like the Herseys, the family took in a boarder.  William E. Murphy, was promoted to sergeant of police in 1909, and in 1911 both he and Joseph Cavanaugh were appointed Commissioners of Deeds--a potion similar to a notary public today but more highly paid.  Murphy would remain with the family for years, still listed at the address as late as 1915.

Stephen A. Cavanaugh was also an attorney, one who found himself on the opposite of the law on August 11, 1916.  When he lit up a cigarette at around 11:00 in the 181st Street Station of the Broadway subway line that night, he was approached by a man who told him to extinguish it.  The New York Times reported "the lawyer refused with a defiant look."

Cavanaugh was apparently unaware that the man was Dr. Charles G. Pease, president of the Anti-Smokers' Protective League of America, and an activist.   In fact, in reporting on the incident, The Times entitled the article "Dr. Pease Busy Again."  Rather than escalating the situation, Pease simply called for a policeman who took both men to the 177th Street station house.  There, according to the article, "Cavanaugh was charged with disorderly conduct."

Five months later the Cavanaugh family sold the house at auction.  It was purchased by Anna Wood who hired architect George M. McCabe to draw plans to alter the interior into studio apartments.  But those plans never came to pass.  Wood sold the house to Harry A. Goidel, who sold it to Lauren Carroll, who sold it to Maria S. Simpson--all the transactions taking place within a two-year period.


The once-elegant home was, nevertheless, operated as a rooming house by the end of World War I.  Among its tenants in 1923 was disabled veteran Anthony Rodriquenz, who had been placed in the Government's Rehabilitation Program but still was unable to find employment.

Suspicious of men like Rodriquenz, Congress launched an investigation in 1923 to ferret out "fakers."  Frank Irwin, chairman of the National Rehabilitation Committee for Disabled American Veterans of the World War lashed out during his testimony before the Congressional committee.  He said his "sincere desire [was] to help mitigate the sufferings of the scarred veterans of this country rather than to attempt to criticize this committee," and insisted that the men were not fakers.  Irwin explained that while men like Rodriquenz had been trained for jobs, convincing employers that a disabled man would perform was a major obstacle.


In 1969 a renovation of the house resulted in one apartment per floor.  It may have been at this time that the brick facade was painted black and the stonework white.

A scourge was developing in the neighborhood in 1985 which New York Magazine exposed.  The periodical tagged Morris Lender and Hardmon Lambert "goon-squad leaders" who were hired to intimidate residents to give up their rent-controlled apartments.  They would move "goons" into the buildings who were "expected to make life in a given building so intolerable that the original tenants would leave just to get away from the terror, or would agree to do so for a small amount of money."  For each apartment they emptied, Lender and Lambert were paid $500 to $1,250.

The Hersey house became a target.  Stephen Cardassi and Gerald Musano were buying up properties in the neighborhood.  When they purchased No. 332 they hired Lender and Lambert to vacate it.  And, sure enough, four months later it was vacant and they resold it.  The following year, however, the pair faced justice.  The Daily News reported on May 23, 1986 "Cardassi and Musano were found guilty of hiring 'professional vacaters' Morris Lender and Hardmon Lambert" to empty No. 332 and five other buildings. 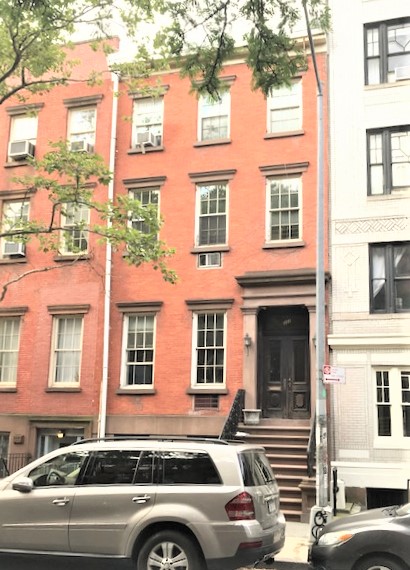 During an alteration in 1980-81 the paint was removed from the facade and the lintels refabricated.  Today the exterior of the Hersey house appears remarkably unchanged after nearly 190 years.