When five Methodists formed a new congregation in the carpenter shop of Samuel Walgrove behind his house on Morton Street near Bleecker Street in 1805, Greenwich Village was still a quiet, rural hamlet.  Decades later The New York Times remembered, "On Saturday afternoon Walgrove swept his shop and put a number of deal benches in position and the church was ready."

The congregation was officially organized in 1811 as the Bedford Street Methodist Episcopal Church.  The previous year it had erected a wooden church "in a green pasture," as described by Charles Hemstreet in his 1899 Nooks & Corners of Old New York.  The wooden church sat near the southeast corner of Bedford and Morton Streets.  "Beside it was a quiet graveyard," said Hemstreet.

Religious decorum was serious stuff among the early Greenwich Village Methodists.  There were two entrances, one for men and the other for women.  In 1886 The Times remarked that "for several years there was a dividing line between the sexes during divine worship."

As the membership grew, the wooden church was enlarged in 1830; but that quickly proved to be insufficient.  The congregation continued to use the old building while a substantial Greek Revival structure was erected next door, on the corner.  Completed in 1840 at a cost of $22,500 (just under $675,000 today), the somber Greek temple design forewent free-standing columns and a portico in favor of tight pilasters and a classical, triangular pediment.

Nineteenth century churches doubled as lecture halls and assembly rooms during the week.  The practice not only provided neighborhood residents wholesome diversions, but often brought addition income to the congregation.  An example was the lecture given here by Professor Maffitt on a Tuesday evening in October 1844.  His subject was "Eloquence, the Eloquence of Nature, of Public Assemblies, the Pulpit and the Bar."  Attendees paid 25 cents admission at the door.  (Maffitt would return several times over subsequent years.)

By the time the learned professor gave this eloquent lecture the Bedford Street M. E. Church was well-known for its revival meetings.  The revival movement, known as the Great Awakening, was often associated with fist-thumping hellfire-and-damnation preachers.

The first revival meeting was held in the old church in 1830.  The Times later recalled "among the church's traditions is one that when Freeborn Garrison was preaching in it he brought his fist down on the book board in the pulpit so earnestly that he split it into two pieces."

Revival meetings were a staple of the Bedford Street M. E. Church for decades.  In his article entitled "The Great American Revival" in the June 1858 issue of The Methodist New Connexion Magazine, Charles Cartledge wrote, "For the last three months this church has been much quickened...Upwards of 150 converts have already united with the church."

The minister, Rev. John P. Newman, continued to swell the membership with converts.  On January 31, 1860 The New York Times reported that he had conducted revival meetings "every night for the past two weeks."  The article said "The most intense interest is manifested, and at each meeting many profess a conviction of sin...During the two years of the present pastor's ministrations a large number have been added to the Society, and its list of members now comprises a thousand names."

While the revival meetings went on, a bitter rift between North and South was nearing a breaking point.  Five months after the Confederate firing on Fort Sumter, the preacher took to the pulpit on September 27, 1861 to draw comparisons between the war and the rebellion of Absalom, son of King David.  He said in part "The wretched conspiracy which was instigated by that rebel son of David, has perhaps no parallel in the whole history of the world, save in this equally shameless and causeless rebellion instituted by the sons of the South."   The rebel, he said, "would betray the mother that bore him and the God who gave him life.  Traitors have existed in all ages of the world, but their nature is everywhere the same--wicked beyond comparison."  The sermon was received, according to a newspaper, with "great applause."

Despite Rev. Newman's indignation about the rebellion, racism in the North was a way of life.  Black Methodists had their own congregation, the African M. E. Zion Church nearby at Bleecker and West 10th Streets.  On May 19, 1881 The Evening Telegram reported on an unusual occurrence of the New York Conference of the African M. E. Church there.  "Rev. [George] Van Alsstyne (white), pastor of the Bedford Street M. E. church, was introduced and made a few remarks of encouragement to his colored brethren."

Rev. Newman presided over the 75th Anniversary service on February 7, 1886.  A "love feast" (another tradition within the congregation) was followed by a regular service at 11 a.m.  The congregants were treated to a recap of the church's history, from the time Samuel Walgrove made room in his carpenter shop.  "At that time Greenwich Village, the upper part of New-York, and separated from the city proper by a considerable distance, was bounded on the west by the Hudson River, on the east by Greenwich avenue, and on the south by a brook that ran to Madison-square," said The New York Times.  Rev. John E. Cookman told the reporter that the Bedford Street M. E. Church "is as well-equipped as any Methodist Episcopal church on Manhattan Island." 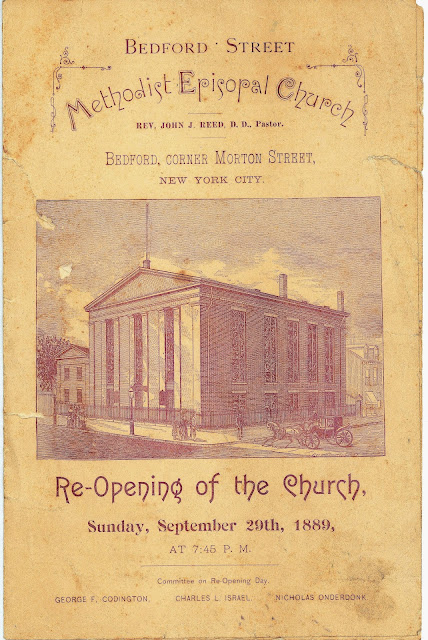 Like most churches, Bedford Street Methodist was closed during the summer months.  The re-opening program featured an etching of the building on the front.  courtesy Sue Ellen Fealko

The 1890's saw the return of the revival meetings.  On April 29, 1893 an announcement in the New-York Daily Tribune read: "Revival meetings all day, conducted by the Wesley Evangelist James Cannon," and a month later the newspaper's readers were advised "If you want to hear old-time Gospel sermon, come to Old Bedford street M. E. church."

A moving service had been held here earlier that year when veterans of the Civil War marched in formation to the church on Sunday night, February 26.  The New-York Daily Tribune reported "The church was filled with many members of... Grand Army posts and relatives and friends of the McClellan Post."  Rev. Clark Wright, who had served as a private in the war, "gave a sermon recalling the old days of strife and the happy issue of the great struggle."

The congregation heard a nearly unique recollection of the war on December 3, 1894.  A week earlier The World had entitled a notice "The Black Knight" and announced "The Bedford Street M. E. Church, corner Bedford and Morton streets, will be favored Wednesday evening with the famous colored orator, Rev. H. J. Hector, in another of his popular lectures, 'Personal Reminiscences of the War.'"

George F. Codington and William Gibson were old-time Greenwich Village residents.  Codington was a well-known builder, responsible for notable buildings like the Academy of Music.   Gibson was a lumber merchant "whose residence, on West Twelfth Street, everybody in the neighborhood was proud to have visited," according to The New York Times.  After having been members of the congregation for half a century, both men were on its Board of Trustees in 1901--Codington its president and Gibson its secretary.

Late in February that year Codington, who was 82-years-old, contracted pneumonia.  The Times reported that because of his age, "his chances of recovery were recognized as doubtful by all of the members of the Bedford Street church, among them Gibson, his co-worker in all church effort."  A prayer service for him was held in the church on March 6, during which Gibson led a prayer of supplication for his close friend.

Ironically, four days later, on Sunday morning March 10, Gibson died in his bed at No. 330 West 12th Street.  Within the hour Codington died in his house at No. 139 Perry Street.

The men were given a double funeral in the Bedford Street M. E. Church on March 12.   The New York Times reported that scores of old-time Village residents crushed into the church for the service.  "Long before it had begun one carriage after another began to arrive in Bedford Street, until it was blocked and the policemen on posts near by began having trouble.

"The trouble was aggravated by a big crowd of sightseers, who filled the sidewalk and street before the church and refused to move.  So dense was this crowd that it was with difficulty that room was made for the mourners to enter."

At the time of the remarkable funeral, businessmen were tossing around the idea of connecting Seventh Avenue, which began at 11th Street, with Varick Street to the south.  The movement gained momentum when the Seventh Avenue subway project was proposed.  The massive civic improvement project would necessitate the the demolition of scores of buildings and portions of others, no matter their architectural or historical significance.

In September 1913 the city condemned the church by eminent domain and ordered it abandoned.  Two months later, on November 17, The New York Times entitled an article "Old Church To Go" and reported that the last services, to celebrate its 108th anniversary, would be held in the venerable structure throughout the week.  "Seven Avenue, under which the subway will be built, is to be extended...and the old Bedford Street Methodist Church is directly in the road."

There was the issue of the graveyard to deal with.  Greenwich Villagers had been buried next to the church for just short of a century.  The Governor signed an act on April 6, 1914 authorizing the trustees "to sell their land adjoining their church property now used as a cemetery and to remove remains therefrom."  The legislation demanded that the money from the sale be applied to removing the bodies and "the procuring of a suitable place or places to which such removal may be made."

Today a triangular island occupies a portion of the site where the historic church once stood. 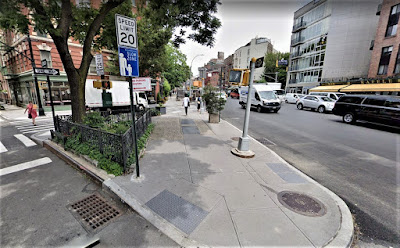