By the mid-1850's the section of Broadway around White Street was no longer residential; the remaining brick houses now altered for business.  On March 31, 1857 an advertisement in the New-York Daily Tribune offered "To Let - 385 Broadway - Warerooms near White-st.; fine rooms on first floor, fashionable side; with easy entrance, suitable for Tailors, Fancy Goods, Milliners, &c."

The titles to that building and the one next door at No. 387 were held by Matilda Ann Grosvenor by the early 1870's.  At least one additional structure sat on a rear lot.  Matilda had been married to Jasper Grosvenor, a well-known banker and partner in the steam locomotive manufacturing firm Rogers, Ketchum & Grosvenor.  He died in 1857.

At 6:30 on the evening of November 28, 1874 fire broke out at No. 385.  The ground floor of the three-story structure was home to dress trimmings merchant S. Rothkopf; the second held the workrooms of the Celluloid Novelty Company, makers of "jet jewelry;" and the third floor and attic were leased by G. Weil & Livingston, pocketbook makers.  Before the fire was extinguished it had spread to all three floors and caused considerable damage.  The New York Times placed the loss at $2,000 (almost $45,000 today).

The damage most likely prompted Matilda to demolish both buildings and lay plans for a modern loft and store replacement.  She and her daughter, Charlotte Matilda Grosvenor, commissioned architect Charles Wright to design two mirror-image structures on the site.  Construction was begun in 1875 and completed the following year.  Although separate buildings which retained their individual addresses, Wright successfully designed them to appear as one.

A commercial take on the recently-popular French Second Empire style, the cast iron facade included simple engaged columns between each opening.  The the rounded corners of the rectangular windows gave the impression that they were slightly arched.  Wright distinguished the buildings with an aggressive bracketed cornice with a pediment that announced "Grosvenor Buildings / 1875."


Diehl & Co., whose showrooms were also in No. 385 in 1890 was seemingly unrelated to the apparel industry.  Their listings vaguely offered "motors, electric."  The firm's appearance signaled what would be an overall change in the tenant list.

Within the year the Central Labor Federations of New-York, Brooklyn, and Hudson County, N.J. was leasing space for its headquarters.  The group sought to coordinate individual unions and achieve cooperation among them.  Following a meeting here on July 12, 1891, The New York Times reported "A special committee reported that it had had a conference with the members of the Pool Brewers' Association and hoped that the old quarrel between the association and the Journeyman Brewers' Union would be amicably settled."

By 1894 the ticket agency of the Union Pacific Railroad opened.  It would be the first of several such offices.  By 1897 H. B. McClellan, agent for the Wabash Railroad operated in the building.  One of his advertisements that year was entitled "Are You Going West?" and continued, "If so the Wabash R. R. offers special inducements to travelers in the way of low rates, equipment, speed, train services, etc."  Indeed, all classes of tickets entitled the holders to meals in the dining cars and "Reclining Chair Cars." 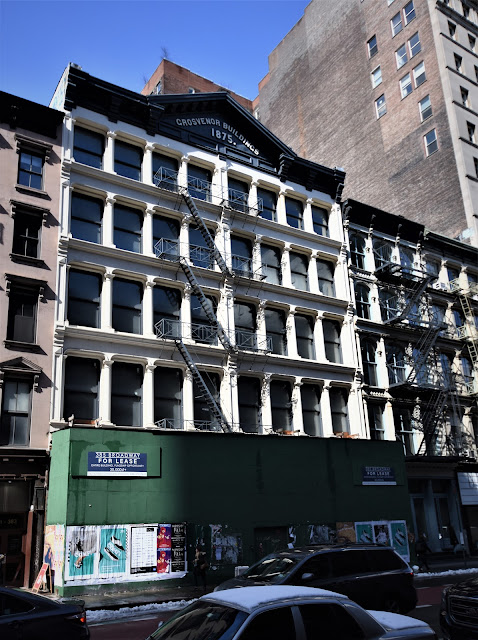 Those ticket offices would be joined by The Seaboard Air Line Railway offices in 1901, and passenger agents E. V. Stratton and A. W. Ecclestone by the following year.  McClellan was still in the building that year; and Ecclestone would remain at least through 1909.

In the pre-World War I years the buildings were home to umbrella maker B. O. Wright & Co.; Harvey & Watts Company, manufacturers of canes and handles; and The Remington Typewriter Company, makers of typewriters, billing machines and "adding typewriters."


The newly-formed Iona Sales Co. moved into the building in 1913.  The firm purchased left-over stock and sold it to foreign markets.  An advertisement in The Clothier & Furnisher in April 1917 announced "We pay highest cash prices for unsalable merchandise.  Shoes, clothing and furnishings."

The American Telephone and Telegraph Company opened its employment offices at No. 387 around 1925.  The firm hired only females as operators; its advertisement in The Daily Star on October 2 the following year read:

In June 1927 the company had sweetened the job description.  It sought "girls aged 16 to 27" and promised that "long distance telephone work, establishing telephone connections with other cities thousands of miles away is interesting and fascinating."  And now there were "an opportunity for a vacation" and "meals on premises at low cost; comfortable rest rooms for use during relief periods."

American Telephone and Telegraph's employment offices would remain in the building until about 1930.

Across the nation the Great Depression years saw an increase in thefts, both large and small, and other criminal activities.  On January 16, 1934 The New York Times reported that three teenagers, Margaret Daroczy and Helen Gallic, both 18, and 19-year-old Fred Ware, had been arrested for attempting to pass $20 counterfeit bills.  The girls "had attempted to pass a bill to the stationer at 385 Broadway."  They were unsuccessful and were caught when Ware later tried to pass one at a liquor store uptown.

In the building at the time was the Union Pencil Company, Inc., which would remain at least through 1946; and the offices of the cigar manufacturing firm of Teijeiro & Garcia.  The Grosvenor buildings continued to reflect the varied industries of the neighborhood throughout the bulk of the 20th century.  In 1941 Irving A. Mendelsohn, textiles, took a floor in No. 385, for instance; and as late as 1992 a textile firm was in the first floor.

But in 1986 the new Project III Ensemble Theater leased space here.  Its first production was Gunter Grass's play Flood which opened on June 1.  The New York Times drama critic Walter Goodman was impressed.  By 1999 the building was home to Soundance Theatre, a performance arts venue. 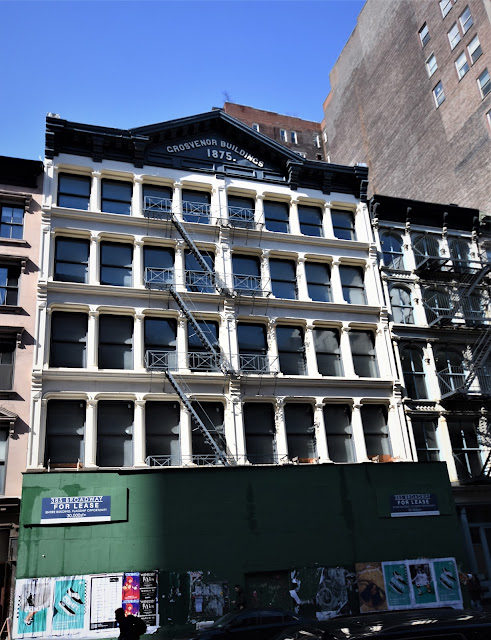 In 2018 the entire building was vacated and the ground floor hidden behind a construction shed.  The outcome of the ongoing renovation work is unclear at this time.