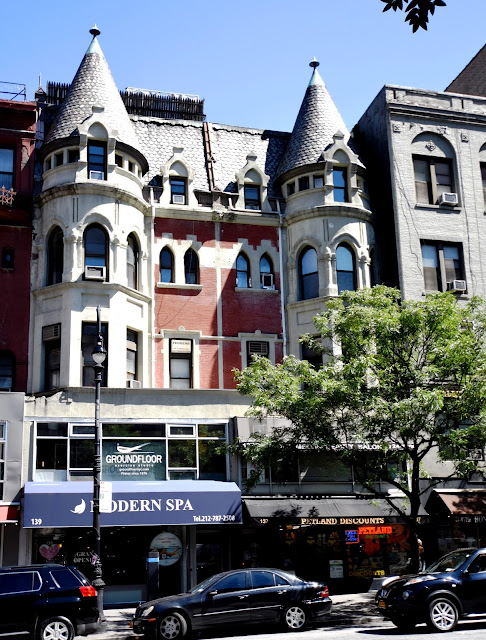 Architects working on the new Upper West Side at the time freely dipped into a grab bag of historic styles, creating sometimes picturesque, sometimes quirky, and often romantic architectural concoctions.  Thom & Wilson’s five houses on West 72nd Street joined the trend; and two of them would especially stand out.

A year later, on August 7, 1886, The Record and Guide remarked on the flurry of construction taking place on the Upper West Side.  It specifically pointed out the block of West 72nd Street, between Columbus and Amsterdam Avenues and mentioned “Robert Irwin has almost finished five handsome brown stone dwellings, two of which are in the Maresque style of architecture.”

The Record & Guide was referring to the mirror-imaged Nos. 137 and 139; but its description of “Maresque” to define the style was simplistic at best.  Indeed, there were pierced Moorish decorations high above the sidewalk level; but they coexisted with Gothic pointed arches, Chateauesque towers with conical caps, and medieval-style carvings.

By the time the houses were completed in 1886 Phineas Chapman Lounsbury was 65 years old and highly successful.  He was President and Director of the Connecticut Merchants’ Exchange National Bank and of the Savings Life Assurance Society; and was a director of the Provident Savings Life Assurance Society and the Worcester Salt Co.  More importantly, he had served several terms as a member of the Connecticut Legislature and was currently serving as that state’s Governor.

Following the end of his term in January 1889, Lounsbury moved into No. 137 West 72nd Street.  In 1896 he and his wife, the former Jennie Wright, built a neo-Classical summer house on a sprawling estate in Ridgefield, Connecticut.  They would also own homes in the Adirondack Mountains and in Florida.

In 1904 Lounsbury’s neice, Annie Rockwell Wetherby (the daughter of his brother, Joel L. Lounsbury) and her husband, John, visited from Minneapolis.  The pleasant stay turned tragic when Annie died in the 72nd Street house on Friday evening, December 2.

The appearance of the Lounsburys name in the newspapers was, of course, routinely happier.  On April 30, 1905, for instance, the New-York Tribune noted “Ex-Governor Lounsbury and family, No. 137 West 72d-st., will soon go to their summer home in Ridgefield, Conn.”

In the meantime, Gardner Thurston Seabury was living next door.  In 1889 three servants lived in the house with him and his wife, the former Clara Elizabeth Vinton.

Gardner died in 1906.  Five years later Clara established the Seabury Memorial Home in Mt. Vernon, New York.  And she would have been best remembered for that “home for those who have labored in Literature, Art, and Education, Music— or any of the various professions” were it not for Albert Hill Noland.

Clara Seabury was 68 years old in 1912 when the 40-year old Albert not only moved into No. 139 West 72nd Street, but changed his name to Albert H. Seabury.  New York society must have whispered behind drawing room doors as Albert and Clara acted as though their peculiar relationship was completely normal.  On March 1, 1914 The Sun noted that tickets for The Symphony Club’s concert in the Waldorf-Astoria ballroom could be purchased “from Albert H. Seabury, 139 West Seventy-second street.”

A social shock wave made its way across the country when newspapers announced on July 25, 1915 that Clara had adopted Albert.  The New-York Tribune’s sub-headline read “A. H. Noland Now Officially Child of Mrs. G. T. Seabury, Rich Widow.”  Clara’s petition to the court revealed that her personal property was valued at more than $1.2 million in today’s dollars, and that she was “a widow of mature years.”  (Upon her death, the estate was disclosed to be more than 5 times that amount.)

The Tribune explained that until 1915 the adoption of an adult was illegal in New York.  “Notwithstanding this, they assumed the mutual actual relations of mother and son.  He lived with her and they travelled extensively here and abroad in such relation, and she had made financial provision for him.  The relationship has been mutually agreeable, beneficial and advantageous.”

The relationship certainly proved “beneficial and advantageous” to Albert following Clara’s death in October 1918.  The bulk of her massive estate was left to him.

Phineas Chapman Lounsbury died on June 22, 1925.  West 72nd Street, once the most exclusive address on the Upper West Side other than Riverside Drive, was now traffic-clogged; its noble residences converted for business purposes at sidewalk level.  That year architect Mortimer E. Freehof was commissioned to convert the lower two floors of the Lounsbury house, No. 137, to stores and offices, and the top floors to a “two-family dwelling.”

The drastic change in the neighborhood was evidenced when a hold-up man named McGlynn was shot by police in the street level business in 1926; and when Prohibition agents raided the operation a few months later.

On November 12, 1932 emerging artist Mark Rothkowitz, who would later gain fame under the name Mark Rothko, married jewelry designer Edith Sachar.  The newlyweds moved into an apartment at No. 137.  They lived here for about a year.

Like its next door neighbor, No. 139 was altered for commercial use in 1927.  Architect Otto A. Staudt created a two-story extension at street level for owner Charles K. Clisby. 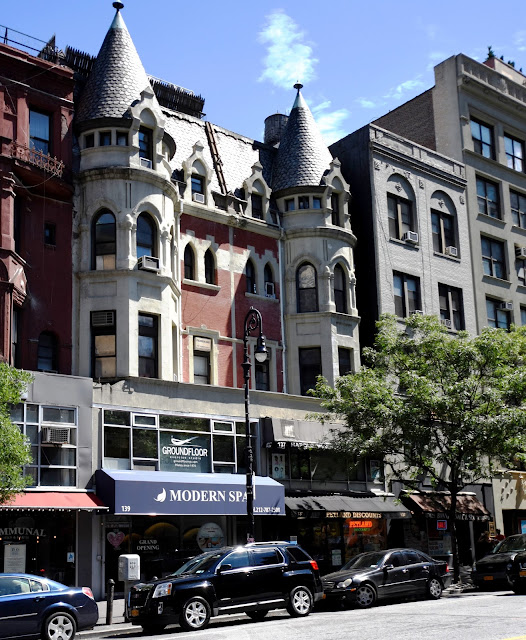 In 1935 the upper floors of both buildings were combined internally, creating two apartments each on the third through fifth floors.  Sometime in the succeeding decades much of the 1887 detailing was removed or shaved flat.  Today the fairytale remnants of the Lounsbury and Seabury residents loom above grotesque storefronts.  But just enough of Thom & Wilson’s whimsical creations remain to catch the eye of even the most disinterested passerby.