The James L. Graham House -- No. 21 Washington Square No. 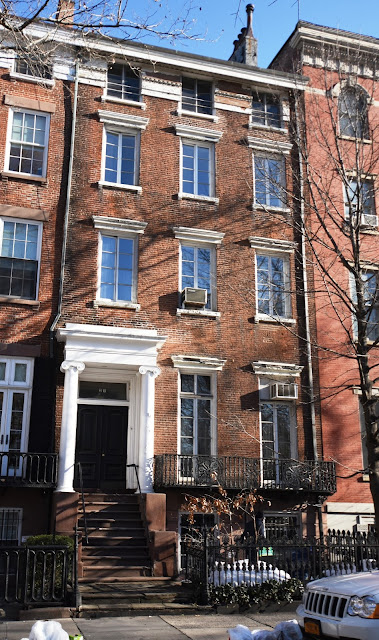 In 1835 Edmund Wilkes began construction of three adjoining houses on the northern side of Washington Square.  George P. Rogers set the tone of the Washington Parade Grounds when he erected his lavish home in 1828-29—the first residence on the square.  Now Wilkes joined the trend by building Nos. 21 through 23.  Completed in 1836 they were high-end Greek Revival residences intended for wealthy homeowners.

Like its neighbors, the stately architectural features of No. 21 announced its tony status.  The exceptional ironwork and parlor floor balcony, the refined Ionic portico, and the ornamented fascia board below the cornice boasted that its owner could afford extras.

By 1842 New York City directories listed the Graham family in No. 21.  Attorney James Lorimer Graham had represented Peter G. Stuyvesant in April 1836 when he proposed to the Board of Alderman the creation of “Hollow Square” (eventually named Stuyvesant Square).  It would be, wrote Lorimer, the city’s responsibility to “plant and improve such enclosures similar to the improvements in Washington Square.”

When Mary married politician Joseph B. Varnum, Jr., the newlyweds moved into the Washington Square house; as did Rebecca and her new husband, Samuel Dexter Bradford, Jr., following their marriage on January 11, 1859.

By now the Graham sons were all working with him at No. 108 Broadway, home of the Metropolitan Insurance Company, of which Graham was President.  James Jr., who had moved out and was living at No. 4 Washington Square, held the position of 2nd Vice President; and  Robert was Vice-President.

When Julia Graham’s 73-year brother, James McCall, fell ill in 1864, he, too, moved briefly into the house.  McCall had been President of the Metropolitan Bank and a partner in James McCall & Co., but had retired years earlier and left the city.  But he returned during the summer of 1864 “to take medical advice.”  Diagnosed with “asthma of the heart,” he was brought from the Clarendon Hotel to the Graham house.  Here he died on Thursday, August 11; and his funeral was held in the drawing room the following Saturday.

In 1872 James L. Graham hired builders John T. Conover and E. & W. N. Dobbs to construct a one-story brick stable at the rear of the house.  But before long he would have more pressing problems than housing his carriage and horses.

The first sign of financial problems appeared in June 1875 when Graham transferred title of the Washington Square house to Julia’s cousin, Elizabeth MccCall.  The Real Estate Record & Builders’ Guide noted it was “assigned to secure to Grantee the payment of debts of $31,900.”

In February 1858 Elizabeth had inherited about $70,000 from her husband’s estate, including real estate.   It was a sizeable amount—translating to more than $2 million today.  Before Elizabeth made an extended trip to Europe, she turned her affairs over to Graham.  When he asked her to sign a paper, she did so without reading it, in complete trust.  It was an absolute power of attorney.

Elizabeth received income from her holdings and had no reason to question Graham.  But when she received a notice from the Sailor’s Snug Harbor that the taxes on a house she owned on 19th Street had not been paid for six years, she headed to No. 21 Washington Square for an explanation.

She later recalled “I went at once to see him about my estate.  He made no explanation in regard to it, except that he had nothing to give me other than the said house, upon which the taxes were unpaid, and the furniture in it.”

Elizabeth sought out an attorney, who gave her bad news.  “I found that he was pressing claims of other relatives against the same defendant, and had obtained from the defendant a mortgage upon his household furniture, ornaments, pictures, bronzes, &c., to secure those claims.”  She told officials in February 1878 that she was nearly broke.  On February 19 an order for Graham’s arrest was granted.

James Lorimer Graham had fallen victim to a not-uncommon 19th century situation.  In order to keep up the appearances of prosperity, he had turned to crime.

The New York Times advised “He was formerly supposed to be very wealthy, and it is said that so great was the confidence reposed in him that several ladies with estates that needed looking after have intrusted them to Mr. Graham’s care.”

The Washington Square mansion became home to the Charles A. Post family.  A respected attorney, Post and his wife maintained a summer estate in Sayville, Long Island.  During the winter season, Mrs. Post busied herself with social activities, including her membership in the exclusive Thursday Evening Club.  In 1888 the New York Amusement Gazette reported, “The Thursday Evening Club will meet on March 7 at Mrs. Charles A. Post’s 21 Washington Square, north.”

Like all socialites, Mrs. Post announced her “at homes,” those afternoons when ladies could visit.   By publishing the days they were receiving, women avoided the annoyance of dropping off their visiting cards at the home of another socialite who, too, was out.   On February 9, 1894 Mrs. Post announced, for instance, that she was receiving “Fridays during the season.”

The convenience of reporting “at homes” was not shared by General William Tecumseh Sherman.  On February 2, 1891, in a letter regretting he could not attend the Posts’ dinner that Saturday, Sherman mentioned to Mrs. Post, “Of course I was sorry to miss you on my last two calls, but the trust is I cannot keep the run of ladies’ days and I have been trained to believe a man belittled by running after what are termed ‘teas.’  I prefer to take my chances, and will surely catch you in some time.

“Of course ladies cannot be always ready to receive callers.  They have their days to society people—an admirable plan, but somehow it don’t suit me, and I must take my chances, and whenever of an evening I happen so far down town as you are doomed to live, I will ring the door bell, sure that some time you will be at home.”

As the push for women’s voting rights gained force, Mrs. Charles A. Post was there to oppose it.  The New York Times called her in 1894 “one of the most earnest of the New-York opponents of political equality.”  She explained her position to a Times reporter on May 1 that year saying, in part, “As it is, to give women the suffrage would only increase the ignorant vote and bring refined women into contact with an element that should not be brought into their lives.”

She argued that women “have so many duties that I do not think it is right to put any more upon them…We are constantly hearing of women who are breaking down in attending to the duties of the home.”

The Posts did not participate in the New York’s winter social season of 1899-1900.  Like many wealthy families who took extended trips, they leased their home that winter.   Their tenant, lawyer E. S. Rawson, was best known to Newport society, where he maintained his cottage, Avalon, on Ocean Avenue.

The Posts were back the following winter, and Mrs. Post resumed her routine of entertainments, like the “luncheon party” she held on Tuesday, February 5, 1901.

In 1917 the aging couple took a 14-room, 4-bath apartment at No. 777 Madison Avenue.  The Washington Square mansion was briefly operated as a boarding house.  On May 19, 1918 an advertisement appeared in the New-York Tribune offering “Large and small rooms, with board; table guests accommodated.”

Then in June 1919 Pepe & Brother brokered the sale of the house to actor E. H. Sothern and his wife.  Newspapers were more interested in Mrs. Sothern, who was the famous stage actress Julia Marlowe.  The couple had appeared together on stage before their marriage; but it was Julia who achieved the most fame.

The Sotherns would not remain in the house for long, however.  On April 22, 1920 the New-York Tribune announced that “Julia Marlowe Sothern’s home in Washington Square is to be made over into an apartment house of the duplex studio type.”  The following day the New York Herald reported “Placido Mori is the buyer of the residence at 21 Washington Square North, sold by Mrs. E. H. Sothern.”

Since 1883 Mori had operated the well-known Mori’s restaurant nearby on Bleecker Street.  He moved into the Washington Square house and continued to run the restaurant, despite the problems of Prohibition.

On Saturday night, January 13, 1923 the 54-year old Mori did not come home.  That night police, armed with a search warrant, raided the restaurant.  They “seized fifty-eight bottles of wine and ten bottles partly filled with whisky,” reported The Times.  Following Mori’s arrest, they went upstairs to the apartment of Louis Funai where they removed 18 bottles of champagne, 247 bottles of wine, 15 bottles of gin, 4 bottles of kimmel and one gallon of wine.  Police estimated the valued of the liquor at $10,000—in the neighborhood of $140,000 today.

Among the residents in the converted Washington Square house by 1938 was former war correspondent Jay Allen.  That year he hosted an internationally-known house guest, Spanish artist Luis Quintanilla.  Considered one of Spain’s foremost artists, he had given up painting to fight for the Loyalist forces after insurgents destroyed most of his life’s work.  Quintnilla had brought with him 60 sketches of prison life.  He had done them while imprisoned for seven months on a charge of harboring four Socialist friends in his studio during the October 1934 Revolt.

In 1942 the former mansion was converted to seven apartments, while preserving the historic façade.  It enjoyed the cinematic spotlight when it was used as the home of Albert Finney’s character, Dr. Sloper, in the 1997 film Washington Square. 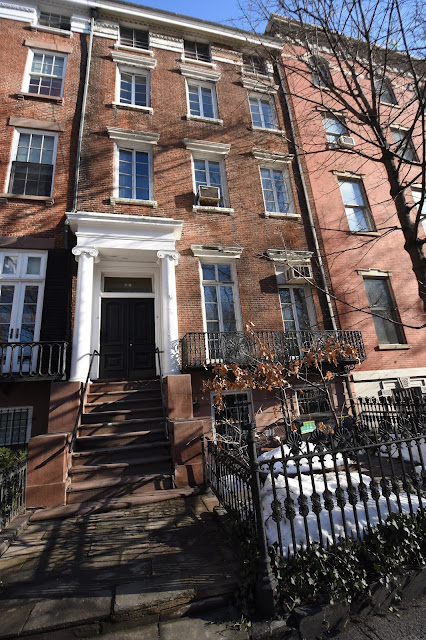 Outwardly little changed, No. 21 is a fine example of the elegant lifestyle of the residents of Washington Square in the 19th century.

photographs by the author
many thanks to Nancy Barricklo for requesting this post
Posted by Tom Miller at 3:16 AM