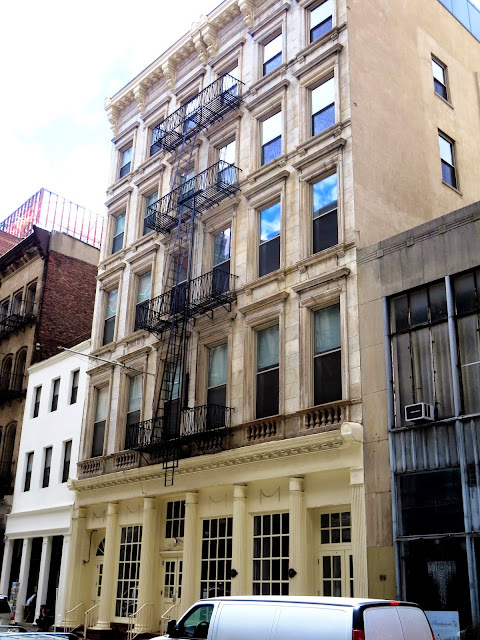 In the 1840s the Brasher family lived at No. 83 Franklin Street, on a quiet residential block of brick-faced homes.  The Brasher’s unmarried daughter, Mary, devoted much of her time as manager of The New-York Female Assistant Society.

The land on which the Brasher home sat was owned by the Livingston family—one of New York’s oldest, wealthiest and most influential families.  As the middle of the century passed, the neighborhood was drastically changing.  The dry goods district was quickly encroaching and homes like that of the Brasher family were disappearing.

On May 1, 1860 builder John Sniffen signed a lease with Maturin Livingston for the properties at Nos. 81 and 83 Franklin Street.  In addition to the many powerful Livingstons in his family tree; Maturin was the son of great-grandson of General and Governor Morgan Lewis, a signor of the Declaration of Independence.

Sniffen, whose office was at No. 152 Henry Street, agreed to Livingston’s stipulation that he would erect “a first class store for dry goods with an ornamental marble front” within eight months.   The builder wasted, therefore, no time in razing the two brick homes and starting construction.

Although records indicate that the project was not totally completed until 1862; at least one tenant had moved in by October 1861.   The stately marble-faced Italianate store-and-loft building sat on a cast iron base a few steps above the sidewalk.  The architect, whose name has been lost, added elegant touches in the carved balustrades below the second floor windows.  Engaged, fluted columns separated the openings of the store front.  High above the street, two sheet metal cornices gave visual delineation to the combined properties.

The first tenant in the building was apparently Wicks, Smith & Co., a dry goods importer which advertised its new location on October 22, 1861 as “west of Broadway, near Taylor’s saloon.”  The firm offered “80 cases of the celebrated prize medal printing of Robert Kay, Manchester, England.”  Its advertisement guaranteed that the chintz goods were “the only lot of Kay’s printed reps imported this season, and [we] believe it to be the most attractive lots of printed goods ever offered in this market.”

Earlier that year, in April, the first shots in the Civil War had been fired.   The dry goods merchants banded together to help the cause within the following months.  On August 17, 1862 The New York Times reported “A movement is on foot to form an association of dry goods merchants for the furtherance of volunteering.”  Among those promoting the cause was Wicks, Smith & Co.  The newspaper noted “An additional bounty of $15 has also been guaranteed by Messrs. Wicks, Smith & Co., of Nos. 81 and 83 Franklin-street, to 25 men enlisting in Sickles’ of the Irish Brigade.”  The $15 incentive that the firm offered to each volunteer would amount to about $360 today.

By 1865 the firm was renamed George A. Wicks & Co.  Its astounding success was reflected in its sales that year—a staggering $10 million.  The firm routinely staged wholesale auctions from the Franklin Street space.  One in March 1866 offered 400 cases of “foreign dress goods” and another, that same month, sold “5,000 pieces [of] fancy cassimeres.”

Such success fostered intense rivalry and on March 24, 1866 a competitor placed fraudulent advertisements in The U. S. Economist, the Evening Post and the Evening Express.  Alleging to announce a George A. Wicks & Co. sale, the preposterous ad included caveats such as “Ladies will be specially attended to by our Senior; but, that there may seemingly be no partiality, they are respectfully requested to stand in line after the manner of boys at the Post-Office” and “The premises will be closed from 9 o’clock p.m. until 3 o’clock in the morning, in order that the Principals may refresh themselves.”

Assuming that the false advertisements were the work of William H. Lee of the firm Lee, Bliss & Co., George A. Wicks & Co., exposed the sham in the New-York Daily Tribune.  It said in part, “Not considering the reply of Mr. Lee in any sense a denial of the fact, we have only to submit the foregoing to the inspection and judgment of the community.”

While the firm grappled with unscrupulous rivals, the London bank of Overend, Gurney & Company collapsed.  It triggered a financial depression, the ripples of which reached the shores of America within months.  In July 1867 what would have been considered unthinkable a year earlier came to pass—George A. Wicks & Co. declared bankruptcy.

The Sun, on July 9, wrote “This failure is naturally calculated to excite a feeling of distrust in business circles, for it is reasonable to infer that when such a concern is compelled to suspend, there must be many others in a tottering condition.”  A week later the Herald added “The failure of a large dry goods house in this city—that of George A. Wicks & Co.—has thrown dry goods paper into some discredit for the time being.”  The newspaper reported the liabilities of the firm to be about $2.5 million—closer to $41 million today.

In place of George A. Wicks & Co. the importing and commission firm of Otto Heinze & Co. moved in by 1883.  The company dealt mostly in hosiery and gloves and would be renamed Heinze, Lowy & Co. within a few years.

Otto Heinze had immigrated from Germany in 1850.  By now he was wealthy and maintained a summer estate at Lawrence, Long Island.  He had co-founded the German-American Insurance Company and lived with his family in a handsome home at No. 60 Pierrepont Street in Brooklyn.  When he died on November 1, 1891 his son Otto Charles Heinze stepped into his position in the firm.

One of the traveling salesmen employed by Heinze, Lowy & Co. was A. A. Plant who lived on Downing Street in Brooklyn.  On January 26, 1893 he arrived in Philadelphia on business, checking into the Continental Hotel.  Two days later he committed suicide by hanging himself with the fire escape rope in his room.  The Sun reported “He stepped off a chair after adjusting the rope around his neck.  He was cheerful at breakfast.”

Unlike his brother, F. Augustus Heinze chose banking rather than the dry goods business.  He became president of the Mercantile National Bank and speculated widely in copper stocks, eventually forming The Montana Ore Purchasing Company.  Unfortunately for Otto, his brother heavily invested the company’s funds in copper.   And in 1907 the bottom dropped out of the copper market.

On October 18, 1907 it was announced that F. Augustus Heinze had stepped down from his position with the Mercantile National Bank.  At the same time Otto Heinze & Co. (again using its original firm name) announced “that the firm will permit itself to be temporarily suspended from the privileges of the stock exchange.”

The Minnesota newspaper The Bemidji Daily Pioneer wrote “The troubles of Otto Heinze & Co…resulted directly from the general unfavorable condition of the copper market.”

F. Augustus Heinze found himself battling years of prosecution by the Federal Government for mismanagement of the bank, for over-certification of checks and other violations of banking law.  In the meantime, Otto C. Heinze struggled to keep his firm afloat until he finally filed a voluntary bankruptcy petition in 1913.

Another large importing firm, J. B. Locke & Potts, had been in the building since about 1899.  Dealers in “white goods and damasks,” its buyers and salesmen traveled widely, often spending time overseas.  One of these was Charles Veith Mills.

Mills was 33-years old in 1915, earning a respectable salary of $3,600 a year.  Although Europe was engaged in a world war at the time, America remained neutral.  Charles Mills set off for England on May 1, 1915, boarding the RMS Lusitania.  He would never reach Liverpool.

On the afternoon of May 7, a German U-Boat torpedoed the RMS Lusitania off the coast of Ireland.  She sank within 18 minutes.  Among the 128 American civilians lost on the liner was Charles V. Mills.

His young widow was the first to file a claim with the State Workmen’s Compensation Commission.  Her claim entitled her to one-third of Mills’ salary for as long as she remained unmarried. 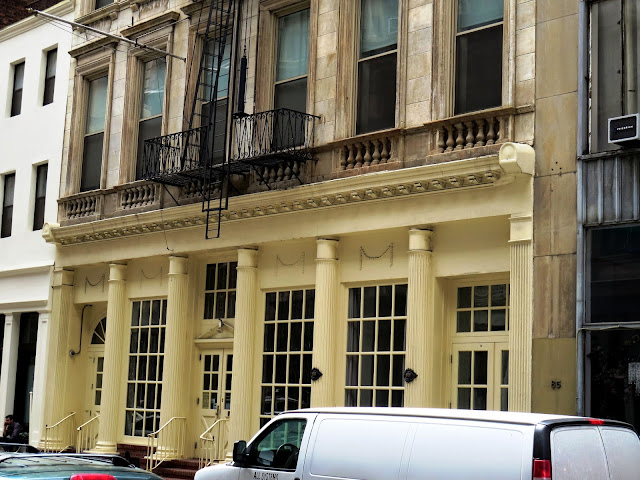 J. B. Locke & Potts would remain in the Franklin Street building well into the 1920s.  Throughout the century it would be home to other dry goods concerns like the Durelle Fabrics Corporation and the Mills Fabric Corporation.  At some point the ground floor was modernized with pseudo-Colonial elements, including a broken pediment over one entrance, a fanlight above another, and the swagged panels over the openings.  It was most likely at this time that the cast iron capitals of the columns were removed.

The building was rediscovered as the Tribeca neighborhood filled with trendy restaurants, shops and galleries in the late 20th century.  In 2013 a conversion resulted in a franchise health club taking over the ground floor and basement, with high-end apartments on the upper floors.