By 1884 the quiet and respectable block of West 21st Street between 8th and 9th Avenues was undergoing change.  The brick and brownstone one-family homes were slowly being converted to boarding houses.   And before the end of the century many of them would be razed to make way for modern apartment buildings.

Among the very first of these would be built by the Evans Estate at No. 345 and would be, as The New York Times put it, “dignified by the title of the Collegian Flats.”    Built for middle-class families, the five-story building offered two roomy apartments per floor, with tall double-hung windows for ample ventilation.

The red brick building was trimmed in stone with up-to-the-minute Eastlake touches—a sawtooth cornice between the first and second floors, for instance, and incised lintel carvings.   The rows of windows at each level were connected by a stone course at the sills and at the lintels, and by a decorative floral tile band –a nice added touch.  Two semi-attached polished granite columns supported a solid stone hood over the entrance, proclaiming that this was not another tenement building.


The Collegian Flats would quickly become the center of a scandalous murder trial that started far away in a Cleveland, Ohio.

In May 1884 24-year old George W. Evans stopped at the American Hotel in Cleveland.  Across the street was the Johnson House where Annie Belts, “a very attractive young woman,” according to newspapers, was a guest.  Annie was the daughter of a Steubenville livery stable owner and had argued with her parents and run away from home.

Evans flirted with Annie through the hotel windows, finally becoming acquainted with her.  What Annie did not know was that he was also the son of Alexander Evans, a notorious pickpocket and sneak thief also known as “Nevins,” and “the milkman.”  Nor did she know he was cruel and abusive.

Evans was attracted to the young girl not only for her good looks, but for the $40,000 of Steubenville property of which she would become the sole heiress.  He convinced Annie to come back to New York with him and in the Fall they were married.   On November 1 he was hired as janitor of the new Collegian Flats.  The couple was given the four-room apartment in the basement.   Things seemed to be going well for the newly-weds.
Trouble soon surfaced.   The jealous husband felt that Augustus White, a partner in the management company of the building, W. A. White & Sons, was taking too great an interest in his wife and that she appeared to reciprocate.  Quarrels ensued.

Tenants began complaining that Evans would lock himself in the apartment with his wife and beat her.  According to The New York Times “sounds of blows and shrieks indicated that he was chastising her, and she afterward complained that he not only beat her, but tried to strangle her.”  The residents were, said The Times, “shocked by Evans’s brutality to his wife.”

The Sun was less sympathetic.  It reported that the tenants “suggested to the agents that he should be removed from the flats, as the woman’s cries were annoying.”

By January Annie Evans was fearful for her life.  When White called one morning and Evans was not at home, she implored the man to help her.

“She said she had discovered that her husband, whom she married hastily, was a villain,” White later recounted.  “He had a bad temper and had beaten her and threatened to kill her.  She told me she was afraid of her life and begged me to help her to get back to her home and friends in Ohio.  Unless I did so she would be driven to killer herself.”

A plan was hatched whereby Annie would have enough time to pack and escape.  On Wednesday, January 28, Evans was summoned to the White offices at 1:00 to discuss maintenance of the water pipes in the building.  When he arrived, White told him he had to take care of something, but not to leave until he returned.

White finally came back at 6:00 in the evening, apologized and asked Evans to return the next day.  When the janitor arrived at the basement apartment, he found that his wife had packed and left.   In the morning he was fired and told to leave.

George Evans, however, did not take losing his wife nor losing his job easily.  He spent 24 hours searching for Annie and at one point was informed she had been seen “walking with Mr. White.”  Evans was enraged.

When he returned to the apartment on Friday night at 11:30, he encountered the new janitor, a black man named Thomas Currie.  The two got into a violent argument which was heard on the upper-most floor.  The apartment of Edmund Coon was on the top floor and in the rear room was top of a shaft that connected to the cellar by the coalbins.  Thomas Coon, a nephew, was awakened by the angry voices below.

“I want you to understand I’m janitor here until tomorrow; then my time’s up.  I have orders not to let anyone in the house at night.  So you get.”

The 36-year old Currie argued that he was obeying the orders of White to stay.

Edmund Coon, who was in the front room of the apartment at the time, was startled by a gunshot.  His nephew told him what he had heard and the pair listened at the shaft, first hearing groaning, then “What did you expect—that I’d let you ‘boss’ me?  I had to defend myself.  Do you want a doctor?”

The men rushed to the basement to find a dazed Currie at the foot of the cellar stairs, bleeding  from the head.  He was able to say that Evans had shot him.   He was taken to New York Hospital where he died four days later.

The manhunt was on for Evans whom police described as “5 feet 9 inches in height, small side whiskers, small black mustache, black hair and eyes, ruddy complexion, medium build, dark clothes and a derby hat.”

Assuming that Annie fled to Ohio, Evans headed there.  Authorities tracked him to Cleveland, Chicago and St. Louis; and then lost the trail.  Nearly a year would pass before Evans was caught.  Detectives rented a room across the street from Evans’s aunt who lived at No. 312 East 105th Street on a hunch that he might return to New York.  Finally, in December, they spotted him at the window of his aunt’s apartment.

He was arrested later on the street.  In the waistband of his trousers was a pearl-handled double-edged dagger 7 inches long.   Evans confessed to the killing.

But it would not be the end of the story.

On January 21, 1886 George W. Evans appeared in court to face his first-degree murder charge.   The Times sized him up for its readers.  “As he sat in the Court of Oyer and Terminer yesterday, on trial for murder in the first degree, he looked very different from the typical criminal.  He had a clean-cut face, a clear complexion, and a bright, intelligent expression.  By his attire he showed himself possessed of good taste.  But there was a flippancy about him that was not pleasant to see in the manner of a man on trial for murder.”

When Evans’s attorney, William f. Howe, stood before the jury, the account of the killing was drastically changed.  According to Howe's version, Evans had acted solely in self defense.  The counsel told that when Currie was told to leave he refused and drew a revolver.  Evans then pulled out his own gun and Currie relented, putting his in the pocket of his overcoat.   When Evans turned to leave to summon a policeman to oust the intruder, Currie said “Now I’ll kill you.”

But Evans was faster than Currie, recounted Howe, and his bullet stopped the would-be murderer.   When Evans realized that the new janitor was shot, he fled because he did not have enough money to hire an attorney to defend him.

Two days later a verdict was reached.   Evans was guilty of manslaughter in the first degree, punishable by 15 years in prison.  “He took the verdict of the jury and his sentence coolly,” said The Times, “and without evident emotion, nor did he break down or show either the quivering of the lip or the moistening of an eyelid when his father, mother, and grandmother gave vent to their feelings in great sobs of grief.”

Evans’s attorney had more tricks up his sleeve, however.

When Thomas Currie had identified Evans as the shooter, detectives were required to ask the question “Have you any hope or recovering from the effects of the injury you have received?”  The question was necessary to establish an “ante-mortem statement;” one which was made by a person believing he was about to die.

Currie replied “It is hard for me to say.”

William F. Howe appealed to the Supreme Court.  If Currie was not certain that he was going to die, his statement could not be “ante-mortem.”  Evans was granted a new trial.

In a plot twist that is inconceivable today, the General Term of the Supreme Court set aside the verdict on June 1, 1886 on the grounds that the dying man’s statement was not “a legal ante-mortem statement.”    There was no retrial because, as reported in The New York Times, “the only evidence against him beyond the excluded statement of Currie is circumstantial and not strong.”

George Evans, the cruel and malicious physical abuser of his young wife and the cold-blooded murder of Thomas Currie was a free man. 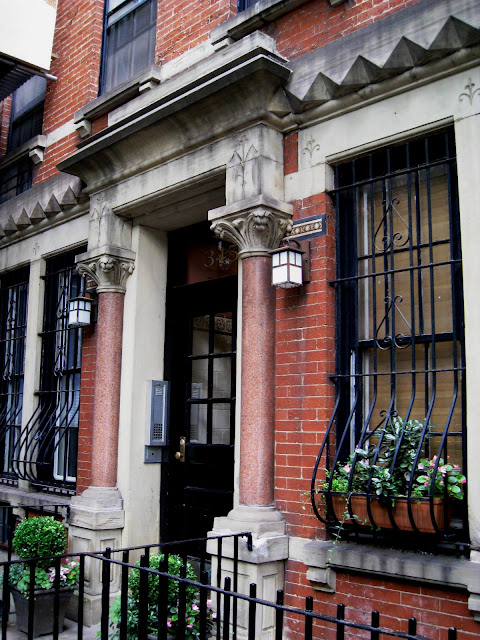 The Collegian Flats never again was the subject of such dark publicity.   Reputable tenants continued to live here like Susanne Pallet who was here in 1911.  A member of the Daughters of the American Revolution, she was descended from John Hart who served under Captain John Prout Sloan on the Marine sloop Enterprise in 1775.

There was, however, a bit of embarrassment when truck driver William P. Jones was arrested for his involvement in a band of pier thieves.  John Quinn was employed as a checker by the Lehigh Valley Railroad at Pier 30.  Quinn would steal valuable freight, like silverware, that was transported by Jones to others who would sell the goods.

But for the most part, the lives of residents at No. 345 West 21st Street like Lt. Francis E. Liszanckie of Fire Engine Company 8 who lived here in 1951, was quiet and unexceptional. 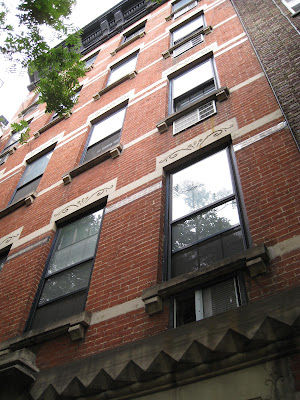 In 1974 the building was converted from two to four apartments per floor.  Otherwise, the prim and attractive Victorian apartment building is unchanged.   Its Chelsea residents come and go unaware that its basement was the scene of one of the most publicized murders in New York in the 1880s.