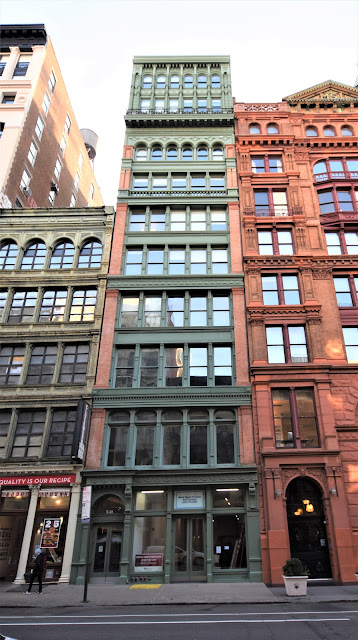 Peter Banner was a clothing merchant in San Francisco before relocating to New York City around 1885.  He started out in the same business here before going into the "hides and wool" business as a commission merchant.  As his fortune grew, he branched out into real estate, forming the Vailima Realty Company.

When Banner first arrived in the city the St. Charles Hotel had stood at No. 648 Broadway, just north of Bond Street, for years.  It was owned by the Jones family, whose former mansion at No. 2 Bond Street, just around the corner, was erected in 1829 when the neighborhood was filling with the opulent homes of the city's wealthy.
But this stretch of Broadway had become commercial by now.  On October 11, 1890 the Real Estate Record & Guide reported that the "Honorable S. Jones" had sold "the seven-story brick hotel" for $200,000--or about $5.8 million in today's money.
Banner hired the architectural firm of Cleverdon & Putzel to design a modern replacement structure on the site.  Demolition of the old hotel began on February 16, 1891.  The Record & Guide reported the site would be "improved" by an "eight-story brick and iron store and loft building" to cost $185,000.  (That increased Banner's overall outlay to $11.2 million today.)
The 30-foot wide structure was to be fully fireproof, with stone and iron staircases.  It would have all the latest technology, as well.  "Two elevators, one each for passengers and freight, steam heat, pneumatic bells, electric light and every modern convenience, have been considered and provided for to make this building complete in all respects," said the Guide.
Banner named his new building, completed in 1892, after himself--The Banner Building.  The architects had produced a striking cast iron and brick structure designed in a commercial take on the Renaissance Revival style.  The stately entrance to the upper floors, to the side of the storefront, was recessed behind fluted engaged columns and was accentuated by a large and elegant leaded fan light.  The segmental arched transoms above the grouped windows of the second floor distinguished them from less remarkable openings above.  Each of the sections was defined by an intermediate, cast iron cornice.
Peter Banner moved his offices into the new building, which filled with apparel manufacturers.  Among the early tenants were Charles M. Levy & Co., makers of boys' clothing; Schiff & Co., importers of millinery; the "overcoatings and suitings" merchant Harris Samilson; Gross & Wise, which dealt in "dress and tailors' silk and sleeve linings;" children's apparel makers Japhe Bros.; and Lipman & Hackes, clothiers.
Lipman & Hackes was operated by M. B. Lipman and Henry Hackes.  The latter's financial success was reflected in his comfortable home on East 64th Street, not far from Central Park.  He became ill in 1896 and his conditioned worsened to the point in August that he could no longer to go work.  Yet after three months of being confined at home, Hackes told his wife, Nellie, he was going to the "shop" on November 26.
Instead, he walked to the summer house in Central Park near 79th Street.   As he entered, he spoke passingly to the custodian, Patrick Burns, about the weather.  Burns had no sooner walked out than he heard a gunshot.  The Brooklyn Daily Eagle reported "Burns pushed open the door and saw what had occurred and called in [a] policeman."
Hackes had pulled out his small handgun--the type gentlemen often carried for personal protection--and shot himself in the temple.  The article said "The revolver used by the suicide was a 32 caliber vest pocket affair, the barrel of which was only half an inch long."  When Officer William Sweeney got to the scene, Hackes was still alive and he was taken to Presbyterian Hospital.  But before his wife could get there, he died.  In his pocket were a letter addressed to his partner, and a check made out to his wife.
His building was successful enough that in 1898 Peter Banner hired architect Robert T. Lyons to add two more stories.  While he laudably attempted to carry on Cleverdon & Putzel's original design, the new proportions could not disguise the fact that the upper portion is an afterthought. 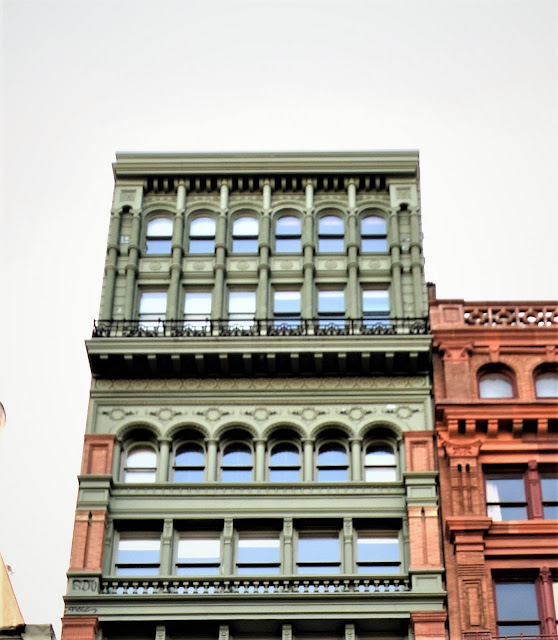 Lyons attempted, somewhat successfully, to meld the addition with the original design.  The cornice was initially crowned by ornate cresting.
Banner targeted the apparel industry in his advertisements.  And it worked.  In 1899 his tenants included Goldberg, Solomon & Co. (deemed by themselves "The Overcoat Kings"); Cohen & Levy, clothing makers; The National Neckwear Company; and Harris Samilson. 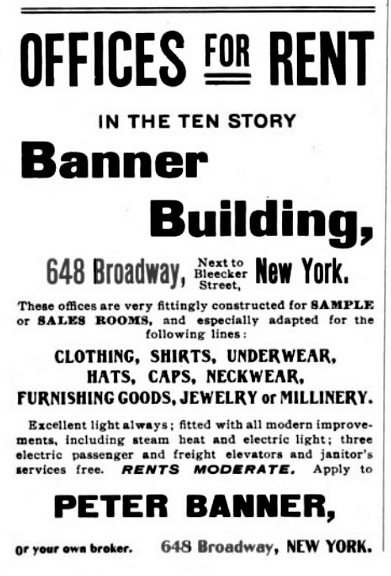 The Clothiers' and Haberdashers' Weekly, December 15, 1899 (copyright expired)
It looked for a time in 1906 that Peter Banner might lose not only the Banner Building, where he still maintained his offices, but other properties like the opulent St. Urban apartment building at No. 285 Central Park West.   At the end of February that year he became ill and was bed-ridden.   Despite the fact that, according to The New York Times on March 18, "In December last he was reputed to be worth $1,000,0000 clear" (nearly 30 times that much today), his creditors panicked.
The newspaper explained, "Mr. Banner has been ill for three weeks, and some of the material men among the creditors heard that he had a stroke of apoplexy three weeks ago.  Payments on the work had been made up to the time he was stricken."  Creditors filed claims totaling $450,000 against his estate.  Banner recovered, resumed payment of his contracts, and things returned to normal.
At the time, the ground floor store was home to the Knickerbocker Drugstore.  It installed a novel addition around 1905, the Cranitonic Hair Clinic.  Here customers could buy a bottle of Cranitonic Hair Food, touted as "The only real microbicide among hair preparations, and therefore, the only preventer of baldness and destroyer of dandruff."  The could also undergo a "microscopic examination of your hair" in the clinic for free.  One presumes that the examinations most often resulted in the recommendation of Cranitonic Hair Food. 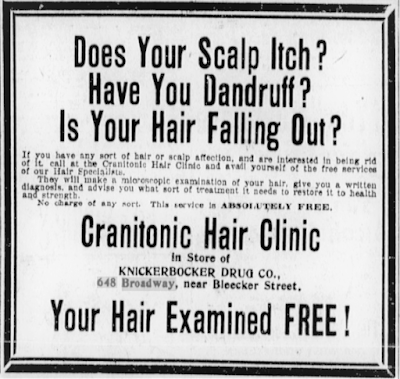 The Evening World, January 18, 1905 (copyright expired)
Among the tenants in 1909 were Henry B. Loewenstein and Sol Solomon, both men's accessories merchants.  Their insurance companies became understandably suspicious when, as reported by The Indicator on August 5, "twelve burglaries had been reported recently from the building at 648 Broadway."  One of the latest had occurred on July 2 when Henry B. Loewenstein told police that his showroom had been broken into and "that $7,000 worth of kid and silk gloves had been stolen."  When detectives searched the premises, they found a checkbook with a stub made out to M. Trotsky, "a person well known to them, and in the Rogues' Gallery as a professional burglar."
Rather than question Loewenstein about the payment and tip their hand, they tracked his movements.  The Indicator reported "They soon found that he was very chummy with a man named Sol Solomon, who had a business on the same floor at 648 Broadway."  And so undercover detectives began shadowing him, as well.  During the last week of September Solomon sent an expressman with a load of silk and kid gloves to a Lafayette Street saloon.  Before he could file a police report on the "burglary," he was arrested, along with the wagon driver.  Both Solomon and Loewenstein were charged with "burglary insurance swindle."
In 1910 the former Knickerbocker Drugstore became one of the city's first cafeterias, the Capitol Lunch.  It was an innovative idea aimed at office workers. There were no waiters (reducing the cost of a lunch).  Customers purchased their meals at a counter.  They then took their trays to "one arm" chairs lined up along the wall.  There were no tables; instead customers ate at what was similar to turn-of-the-century school desks. 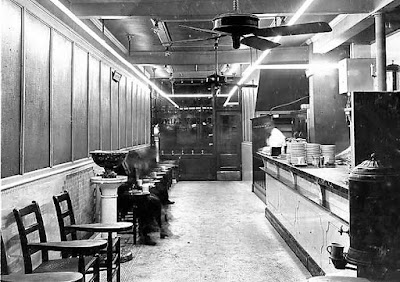 The interior of the Capitol Lunch would have looked much like this one.  original source unknown.
Peter Banner retained ownership of No. 648 Broadway until 1916.  On April 16 that year The New York Times reported on an "interesting mid-Broadway deal."  It was the "purchased by Duke de Moro of Essex, England, of the ten-story commercial building at 648 Broadway."
The building was the scene of a terrifying and fatal incident on May 6, 1921 when an elevator plummeted five stories, killing two passengers.  The 26-year old operator, Harold Jackson, was arrested on homicide charges.  Fortunately for him, he was freed on May 27.
No. 648 Broadway continued to house apparel and millinery firms throughout the first half of the 20th century.  In 1928 the millinery firms of Teitler Bros. and the Biltmore Hat Company operated here, for instance.  A more surprising tenant came in 1929 when the office of the American Association of Plumbers Helpers moved in.
Mid-century saw a new type of tenant in the building as the garment district moved northward.  The end of World War II sparked the emergence of Army-Navy stores across the nation which sold off military surplus.  In 1950 Drucker Surplus Co., Inc. was in the building, offering Army mackinaws for $4.99 and regulation "50% wool shirt and drawers" for $.98 each.   A pair of chino work pants could be had for $1.99--about $20 today.
Drucker Surplus was replaced in the early 1960's by Jay-Man, which described itself as "New York's first and only office equipment Supermarket."  By then a renaissance of sorts was overtaking the Broadway neighborhood.  By 1977 the off-off-Broadway theater Relativity Media Lab was here; and in 1980 the nightclub Isaiah's opened.  On July 3 that year The Villager noted that the $5 cover charge on Fridays "includes Reggae dancing all night."
In the meantime, several of the former lofts and offices upstairs were being used by artists and others as residential spaces--under the radar of city buildings officials. 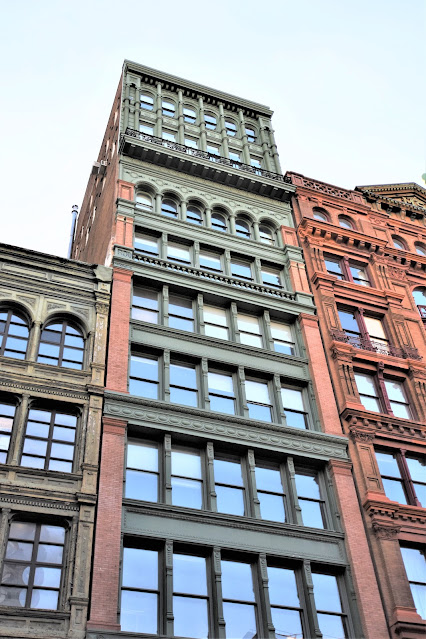 In 1981 the Jazz Forum opened.  The featured acts were routinely covered by The New York Times, which reported on April 4, 1982, "The tap choreographer Gail Conrad will present 'tap-dance shorts' for herself and her six dancers and five musicians at the Jazz Forum."
Upstairs was The Gay and Lesbian Switchboard, an all-volunteer "counseling, referral and information service for gay people and those interested in gay people."  Founded in 1972 and supported solely by donations, it was staffed from noon to midnight.  The telephone operators answered 30,000 questions a year from people want to to "talk about everything from the suicide of a gay friend to where to find a gay dentist," according to Douglas Martin's article in The New York Times on May 2, 1990.
The Village Independent Democrats moved its offices into the building in November 1992 after having been just off Sheridan Square for three decades.
In June 1995 the president and treasure of The Gay and Lesbian Switchboard stepped down after six years service.  An acting treasurer briefly took his spot.  When the permanent treasurer, who was selected within a few months, contacted the bank he was shocked to find a balance of $69.  It seemed that the acting treasurer had absconded with the group's $14,000 operating funds and surplus reserves.
With the threat of shutting down looming, the rent three months in arrears and the telephone company unpaid, president Raymond Wadkins wrote to donors on September 23, "After 23 scandal-free years of serving our community, the switchboard is in real danger of closing."  Within a week $11,000 was received, allowing the service to continue.
From the mid-1990's to around 2007 the ground floor was home to F.A.T. Jeans & Shoes, affiliated with the Yellow Rat Bastard, the flagship store of which was further south on Broadway in Soho. 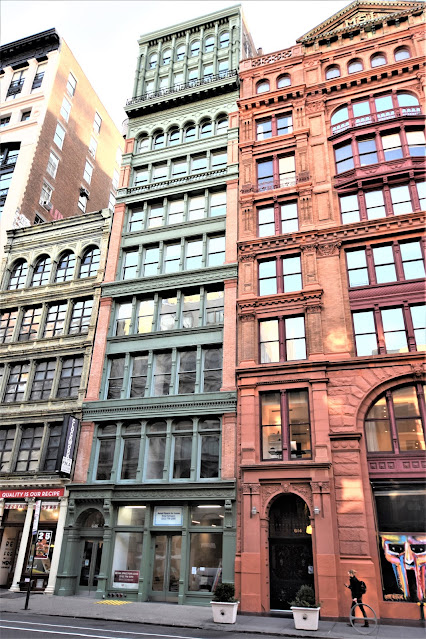 A renovation to the building completed in 2015 resulted in offices throughout and a carefully restored façade.  Unfortunately the iron cresting above the cornice was removed sometime before 1938. But other than that and the expected replacement windows, the Banner Building appears nearly unchanged since 1899 Robert T. Lyons added the two upper floors.
photographs by the author
many thanks to reader Rich Gombar for suggesting this post
Posted by Tom Miller at 1:13 AM