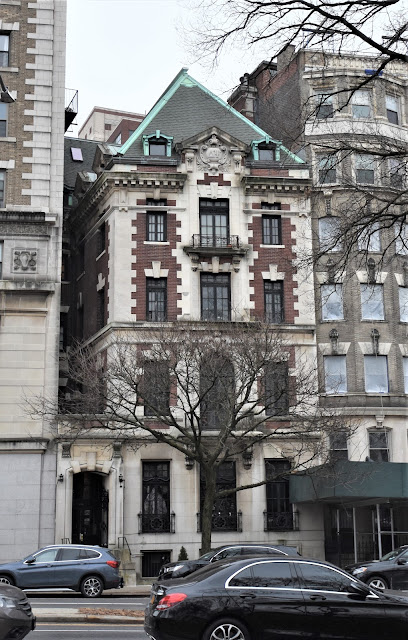 Delta Psi Fraternity was founded at Columbia University in 1847.  Because it was the fraternity's first chapter, it was given the name Alpha.   In the second half of the century, as exclusive university-based clubs were formed--the University Club, Princeton, Yale and Dartmouth Clubs among them--the St. Anthony Club (sometimes called the Alpha Club) was organized.  Its announced purpose was "to promote social intercourse among members of the Delta Psi Fraternity."
The New-York Tribune pointed out that Delta Psi was the first "of the Greek letter societies to establish in New-York a club which presents many of the features of the other society clubs in the city."
The Delta Phi Society erected a handsome clubhouse designed by James Renwick, Jr. on East 28th Street in 1879.  The Sun's Guide to New York later noted "This is the oldest and probably the wealthiest of the college fraternity clubs in this city...Not only is membership restricted to members of the Delta Psi fraternity, but no non-member is even allowed to pass the threshold of the club-house."
In the spring of 1895 Columbia University began erecting buildings far north of the city in Morningside Heights.  A year later the school relocated to the remote campus, leaving the club in its wake.  In response, on March 23, 1897 the Alpha Club acquired a 36-foot wide plot on Riverside Drive between 115th and 116th Street from Harriet B. Hale.
The site was conveniently close to Columbia's new campus and afforded breathtaking views of the Hudson River and New Jersey palisades.  The club hired the architectural firm of Wood, Palmer & Hornbuster to design its new clubhouse.  The commission was influenced, no doubt, by the fact that George Carnegie Palmer was a Delta Psi brother.  The plans, filed on August 26, 1898, called for a "5-story brick and stone club house" to cost $45,000--or around $1.43 million in today's money.  The final cost was reportedly nearly twice that amount.
The architects blended the Beaux Arts and neo-French Renaissance Revival styles to create a stately red brick structure liberally trimmed in limestone.  The entrance, which was placed discretely back from the property line, was accessed by a covered porch which provided a balcony to the second floor.  (Openings in the stone porch gave sweeping north views before a 20th century apartment building snuggled up against it.)
The center openings of the second through fourth floors held French doors that opened onto balconies.  The stone cornice was broken by a false stone dormer which embraced a carved cartouche with the fraternity's symbols.  The fifth floor took the form of a hip roof with copper- and stone-clad dormers. 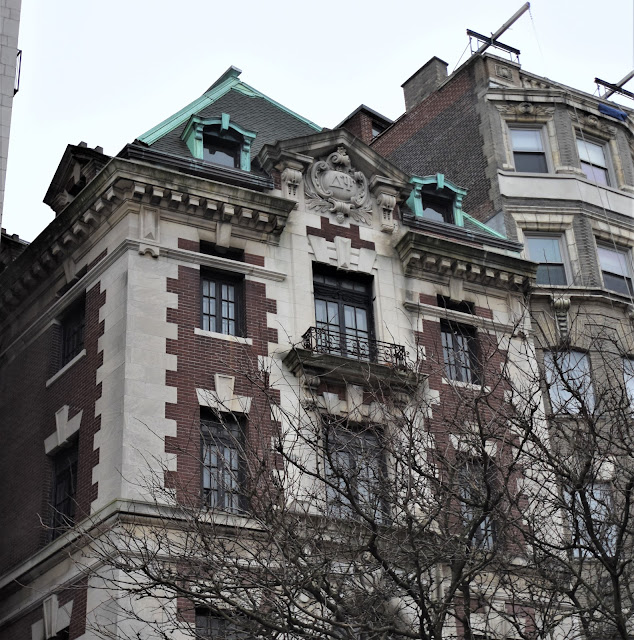 Known as St. Anthony Hall, the clubhouse, like the exclusive men's clubs downtown, had a dining, billiard, meeting and reception rooms, a library designed in the emerging Arts & Crafts style, and sleeping rooms for 20 resident members.  Fraternity historian  Edward Fermor Hall wrote in 1906 that it was "beautifully decorated and finished in marble at a large expense."
That the members of the Alpha Club came from some of the country's wealthiest families was pointedly evidenced in 1905 by one resident of the Hall, Rutherfurd Stuyvesant Pierrepont.  A senior that year, he came from the millionaire Pierrepont family of Brooklyn.  His brother, Seth Low Pierrepont, was a sophomore.  Rutherford was known on campus as "a good athlete and wears the varsity 'C' for rowing," according to The Sun.  But the newspaper was not reporting on his athletic abilities.  It was announcing that the 23-year old had paid for the erection of Hamilton Hall--a $500,000 gift to Columbia University (the amount would be three times that much today).
Hermann Oelrichs, Jr. lived in St. Anthony Hall in 1913.  He had grown up in the marble-clad mansion on Fifth Avenue at 57th Street and the family's opulent summer estate, Rosecliff in Newport.   When his father died in 1906 he left the then 15-year old boy a massive fortune in trust equal to $1.5 billion today. 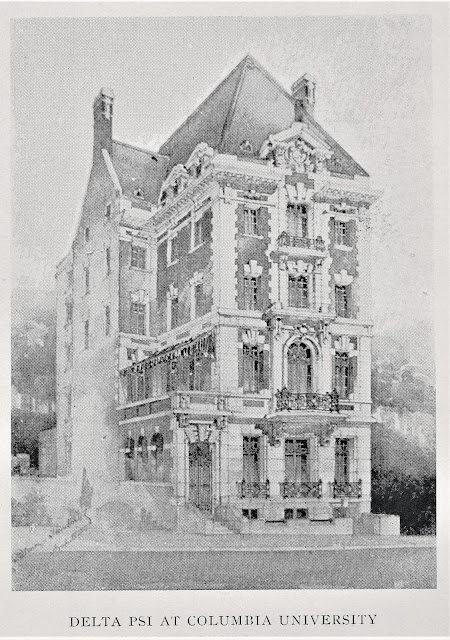 The American Architect and Building News, 1899, copyright expired
Having millions of dollars does not change the fact that college boys are college boys.  On September 30, 1913 Hermann took possession of a new automobile.  That evening the telephone in St. Anthony Hall rang and, as fate would have it, Hermann answered it.  Lucille Singleton asked to speak to D. M. "Billy" Claghorn.  He was not in (as a matter of fact he was in Washington State) and it became evident that Lucille and he had never met, The Knickerbocker Press saying "she sought an introduction."
Oelrichs apparently recognized an opportunity to meet a young woman and did not disclose the fact that he was not Claghorn.  "After some talk he agreed to take her for an automobile ride."   Lucille, described by The Evening World as "a beautiful young girl with a mass of tawny hair," lived nearby on West 115th Street.  Oelrichs picked her up in his brand new car.  But, according to Lucille, he "became insanely jealous when she asked him to bring their automobile ride to a close that she might keep another engagement at her home."
A subsequent argument resulted in Oelrichs smashing his car into a tree at Broadway and 120th Street.  Both he and Lucille suffered lacerations from broken glass.  But in her hysteria Lucille was positive that she had been stabbed--and she still thought she was with Billy Claghorn.  The following day she filed a complaint that he had inflicted ten stab wounds "in the right arm, breast, neck and side."
The car was quickly identified as belonging to Oelrichs, but when questioned Lucille said she did not know him.  A reporter from The Evening News spoke to Oelrichs on the phone, who explained:

I loaned my car to Claghorn last night...I don't know what he did with it.  I haven't seen him since he drove away early last evening.  I didn't know anything about the accident until I heard of it this morning, but it's ridiculous to say that Claghorn stabbed anybody.  Why, such a thing is impossible.

Word of the incident reached Claghorn that morning.  A report from Tacoma, Washington said, "D. M. Cleghorn [sic], former Columbia student, was indignant to-day when told that his name had been mentioned in connection with the accident to Miss Lucille Singleton in New York last night...he believes that some New York man is masquerading as Cleghorn [sic]."
Oelrichs's story soon fell apart as witnesses to the accident identified him.  But Columbia students rallied behind him, nevertheless.  One told a reporter from The Evening World, "It's all that girl's fault.  If she'd kept her mouth shut Hermann would never have been mixed up in this."  The matter was closed when Lucille apparently accepted a $5,000 settlement--just under $135,000 today. 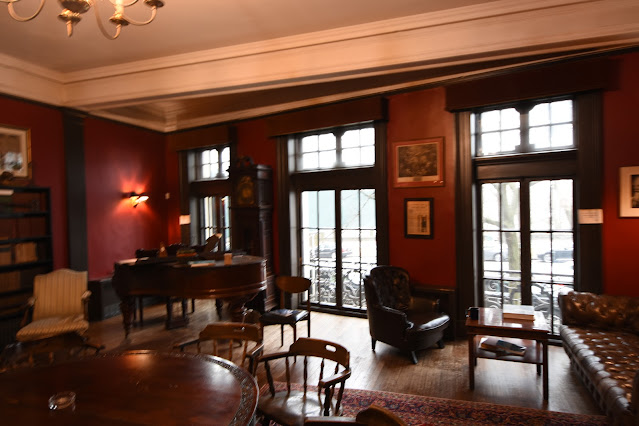 St. Anthony Hall was the scene of tragedy two years later.  Daniel Le Roy Dresser was a well-known financier whose sisters had all married well.  Edith Dresser had married George Washington Vanderbilt and lived in the massive 250-room Biltmore estate in North Carolina.  His others sisters were Mrs. George C. Merrill, Mrs. John Nicholas Brown, and the Countess d'Osmay of Paris.
On the afternoon of July 10, 1915 Dresser's wife of six months, Marcia, was just preparing to leave their home to meet him and head to their Newport estate when the telephone rang.  Dresser's attorney C. W. Gould, told her not to come.  The reason was devastating.
Earlier Dresser had gone to St. Anthony Hall.  The Sun reported that around 3:00 "William Bainbridge, a steward at the chapter house, left for a few minutes."  Dresser, who was in the library reading, was left alone in the house.  Just as Bainbridge returned, C. W. Gould arrived in a taxi.  He had received a registered letter sent by Dresser earlier in the day saying that "the nervous strain" was more than he could endure.
The Sun reported, "The steward was unaware that anything untoward had occurred until Mr. Gould bounded up the steps and demanded to know where Mr. Dresser was.  Bainbridge told him he had last seen him on the third floor in the library, and without further ado Mr. Gould went up stairs.  Dresser lay dead on the floor, a .38 calibre revolver in his right hand." 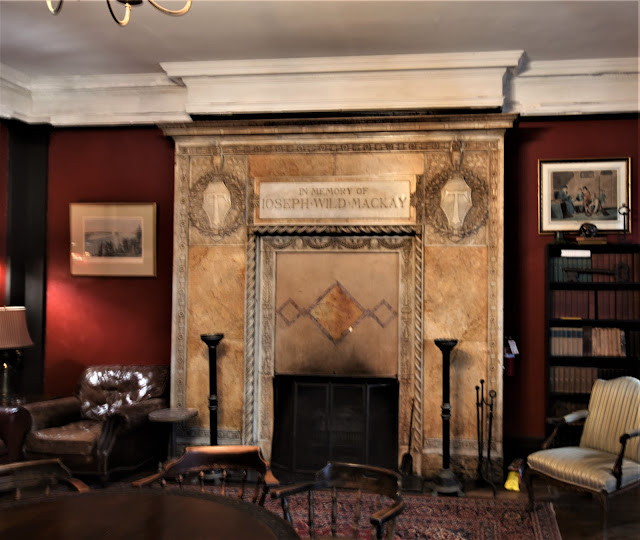 The striking fireplace in the main room is dedicated to member Joseph Wild Mackay who, like Hermann Oelrichs, was a member of the varsity rowing team.
A rather unexpected resident of St. Anthony Hall was Charles Christopher Trowbridge.  He was not a student, but a well-respected professor of physics at Columbia since 1892.  The Sun said of him, "Besides his extensive laboratory investigation in modern physics he contributed toward the knowledge of meteors and the mechanics of bird flight."  He was still living in the clubhouse on June 2, 1918 when the 48-year old bachelor died.
As members came and went over the decades, protocol was slightly relaxed.  By the third quarter of the century fewer resident members wore jackets and ties on a day-to-day basis.  Yet many of the generations-old traditions remained.  In the 19th century James Grant Wilson had described the Alpha Club as a "secret order" and on March 31, 1889 the New-York Tribune had said of the old clubhouse, "Those who are not permitted to wear the mystic St. Anthony cross, with its shield of blue enamel, its Hebrew letters and its skull and bones, know little of the interior of the heavily bolted club-house of Delta Psi."  And as late as October 7, 2013 Kaitlin Phillips, writing in the Columbia Spectator, said, "St. A's is one of three secret societies at Columbia." 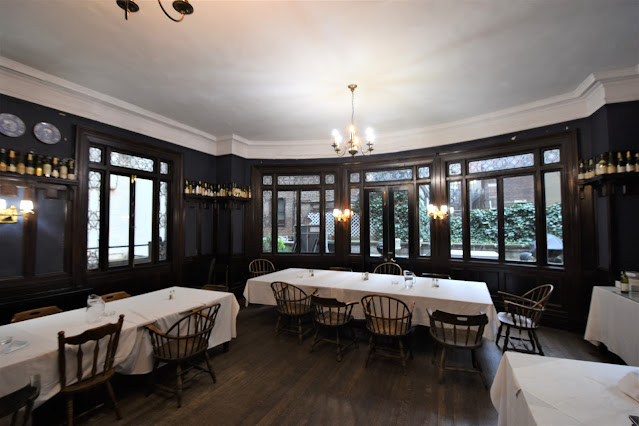 But the modern St. Anthony Hall was not always so "heavily bolted."  In April 1975, for instance, it was opened to scores of decidedly non-members.  The New York Times reported "A dozen Vietnamese and Vietnamese-American children romped through a bazaar at a fraternity house at Columbia University over the weekend, under photographs of crippled Vietnamese youngsters their own age  begging in the streets of Saigon."   The 200 guests were new to America, many of them wives of former American servicemen.  The bazaar was held to raise funds for war refugees in Vietnam.
The loyalty and fervor for St. Anthony Hall held by its members was typified by William Irvine when he read an article in The New York Times on May 11, 1988 which called the fraternity system "self-selecting and discriminatory."  He fired back a letter to the editor which said in part:

My own college fraternity, St. Anthony Hall, was founded at Columbia before the Civil War as a literary society, which it remains.  It is coeducational and has many undergraduate members involved in academic, political and athletic pursuits on campus.

He accused the article's writer of being "uninformed." 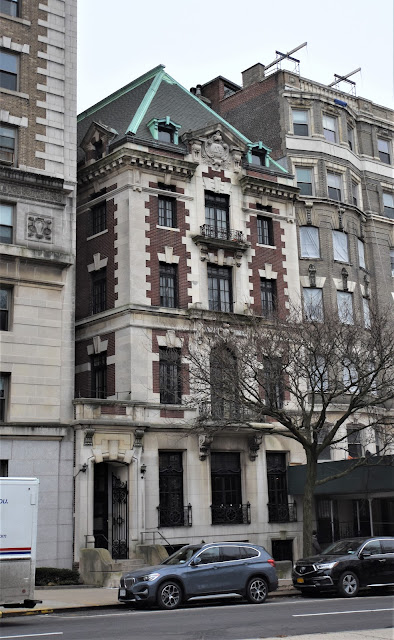 The aristocratic facade of St. Anthony Hall is remarkably unchanged.  The past few decades have not been kind to areas of the interior, however, with seeping water causing noticeable damage in the lower areas.  A $100,000 drive for restoration funds is ongoing.
photographs by the author
many thanks to Will Barker for his help and guided tour.
many thanks, too, to Tad Tharp, Board of Trustees member who prompted the post and shared his vast knowledge.
Posted by Tom Miller at 1:07 AM