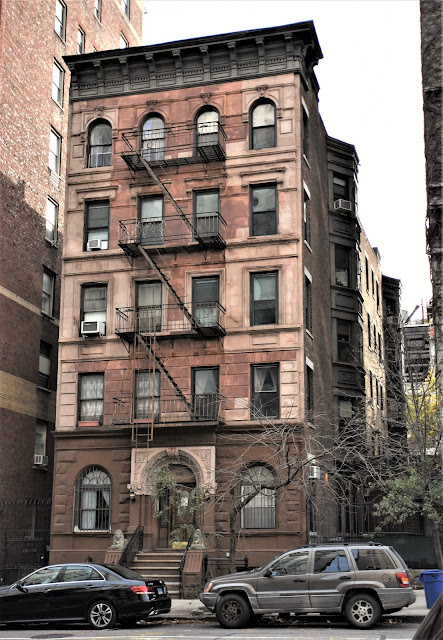 Ferndon married Renaissance Revival and Romanesque Revival in designing the building.  The brawny, uncut stone blocks that faced the first floor and the clustered columns upholding the arched entrance, for instance, drew from Romanesque.  But the delicate carvings within the spandrel panels were pure Renaissance Revival.
The treatment of each of the upper floors was slightly different, with the arched top floor openings echoing those of the first floor and creating a happy balance.  Ferdon had the unusual opportunity to add fenestration and jutting bays to the south elevation because of the old lane which was not included in either this property nor that of the plot to the south of it.  The venerable pathway had originally joined the Bloomingdale Road to what is today the West Side Highway.
Each of the apartments in the building contained eight rooms, all of which, because of the lane, received natural ventilation and light.  Tenants enjoyed not only electric lights, but a passenger and a service elevator.
The building filled with white collar tenants, among the earliest of which was German-born musician Hermann Hans Wetzler.  His apartment doubled as his studio, where he taught "piano, harmony, composition and organ."  (His organ lessons were no doubt conducted elsewhere, although he very likely had a "parlor organ" in his suite.)

Wetzler did not rely solely on lessons for his income.  He was as well the organist at Trinity Church and a favorite among socialites for their musicales.  As the summer season drew to a close in 1897, for instance, the Newport, Rhode Island Herald noted:

There has been more good music this season at Newport than ever before.  Among the numerous musicales those given by Mr. and Mrs. O. H. P. Belmont, at Belcourt, were the most prominent.  Mrs. Belmont had engaged Mr. Hermann Hans Wetzler, of New York, to arrange and conduct her musicales and to play the beautiful large organ in her house, and showed rare artistic judgement in this choice, as well as n the general management of her musical entertainments. 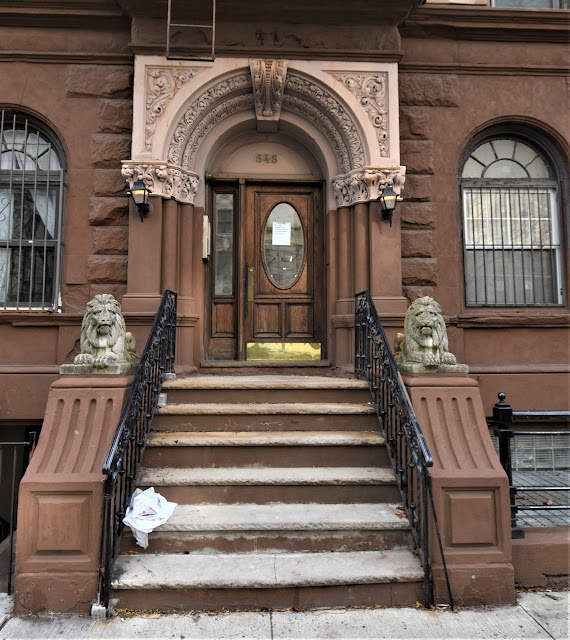 Housing laws at the time prevented landlords from discriminating against families with children; however the practice was still rife.  In 1921 the Daily News sent investigative reporters, masquerading as apartment hunters, into the field.  On October 21 the newspaper's findings said in part, "At 646 West End Avenue, three furnished rooms, in the back of the house, rent for $160.  But the superintendent scowled inhospitably at the mention of children.

"Miss Von Winkle, the owner, positively will not take children," he said.  "If you have children you must leave them somewhere else.  The last tenant had a child who broke up the furniture and ruined the wall paper.  No more children here."

That year the well-to-do attorney Allen T. Hopping and his wife, the former Genevieve McMaster, separated.  Genevieve moved into her mother's three room apartment at No. 646 West End Avenue with their four year old daughter, Mary Genevieve.  Genevieve found a job in a wholesale millinery firm making $35 a week.
Allen took Genevieve to court in a custody battle that would last six years.  As it turned out, neither would triumph.  On March 23, 1927 The Yonkers Statesman reported that Supreme Court Justice Mahoney had given custody of the now 10-year-old to her grandmother, Emma Louise Tilton Hopping of Hastings-on-the-Hudson.
Emma was the widow of millionaire Andrew Howard Hopping who had left her his entire estate.  The ruling said "These are advantages which could not be given either by the father or mother.  In my opinion the child should not be deprived of them solely because of the opposition of the mother, whose chief objection arises from an alleged love for the child and a desire to have her constant companionship."  He called Genevieve's motives, "selfish."
Sadly for Genevieve, she was allowed to see her daughter only on the last weekend of each month, and could have her from 4:00 p.m. on Christmas Day to the same time on December 31.
No doubt the most celebrated tenants were the New York Yankee's pitcher Vernon Louis "Lefty" Gomez and his wife, Broadway star June O'Dea.  The couple was married on February 26, 1933 and leased an apartment in the building.
Lefty had debuted on the mound for the Yankees on April 29, 1930.  According to him, trouble between the couple had to do with their conflicting careers.  He wanted her to accompany him on road trips, but she desired to continue her stage career.  According to June, it had more to do with the hurler's drinking and "self destruction" problems.
She said in court in May 1938 that twice she had pulled him from a window sill before he could jump.  And once while driving home from a Brooklyn game he said to her "Maybe it would be a good thing if I would wreck this car and kill us both."  June claimed that when he drank, his temper overtook him.  She testified, according to The New York Sun, "One day, during the pitcher's 1935 season, he tried to beat up two Negro boys at their apartment on 646 West End avenue, but she managed to get him into the house.  That was the time she received the black eye."  Despite the highly-publicized proceedings, the couple reconciled and had two daughters and two sons.
For the next few decades professional tenants came and went.  Among them in the 1940's was Charles Joseph Herman, the chief clerk of the Upper Park Avenue Branch of National City Bank, in charge of operations.  And when World War II broke out, John T. Brickley left No. 646 to join the Marine Corps.
Brickley had attended Dean Academy in Franklin, Massachusetts where he was a star football player.  He got his talent naturally, his father Charles E. Brickley having been "one of Harvard's gridiron immortals," according to The New York Sun.  Another student, Rodney D Sadler was never able to get a regular position as tackle on the team, overshadowed by "the huge form of John T. Brickley," according to The New York Sun.
In an amazing coincidence, the two men were in the same Marine regiment, stationed in the South Pacific. They participated in the battle of Guadalcanal and now their old rivalry resumed.  The New York Sun reported on June 29, 1943, "Today Private first class Sadler is a second string tackle on a Marine regiment eleven--still trying to take the 'Varsity' assignment away from his friendly rival, Private First Class Brickley, U. S. M. C."
In the early 1980's the building was purchased by the West Side Kollel Torah, or Kollel Yisroel V'Shimson.  A synagogue was installed in the basement level.  It was the destination of jeweler Moses Dyckman each day as he attended the 6:45 service before he headed to work.
On the morning of September 15, 1981 Dyckman was walking to the synagogue when a car pulled up and two men dragged him into it.  Later the man's family received a telephone call demand for $10 million in ransom.  While the kidnappers waited, detectives received a tip that led them to an abandoned building in Harlem.  There they found the 86-year old handcuffed, gagged and with a paper bag over his head, but unharmed.
Unaware that Dyckman had been rescued, the kidnappers continued calling his home, eventually negotiating a drop-off point and a scaled-down ransom amount.  News coverage tipped off the crooks and they temporarily escaped capture.  But on October 7, 1981 The New York Times reported that two men had been arrested and a third, whose identity the police knew, was being sought. 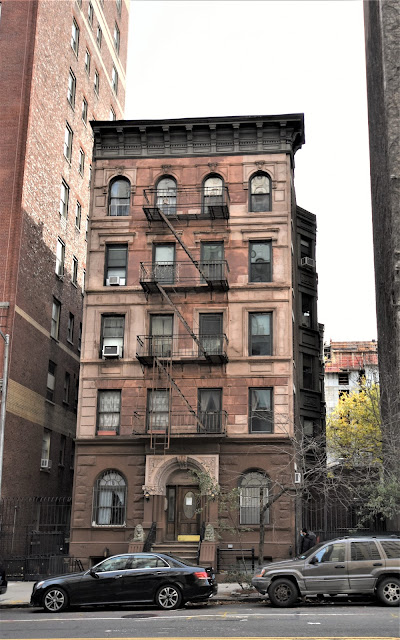 The owners completed a renovation in 1984 that resulted in four apartments per floor, and another in 2009 that converted the first floor to classrooms, offices, and two apartments.
photographs by the author
Posted by Tom Miller at 1:18 AM