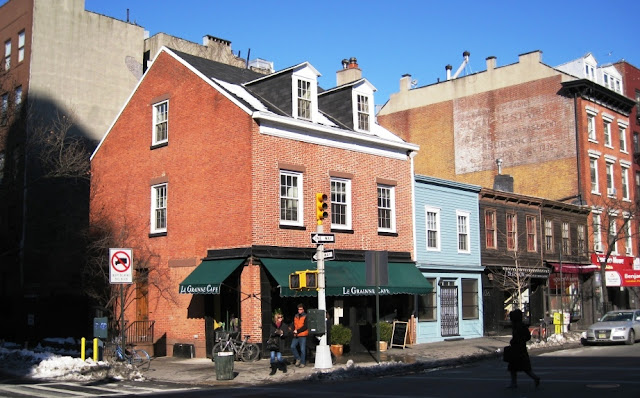 At the corner of West 21st Street and 9th Avenue sits a quaint café in a venerable red brick Federal house. Three astonishing little two-story wooden structures line up next to it going northward, creating a fantastic glimpse of old Chelsea.

The handsome, broad home with Flemish-bond brickwork at No. 183 9th Avenue was built between 1831 and 1832, as the great Gothic Revival General Seminary was rising on the plot across 19th Street to the south. The steep pitched roof has two prominent, narrow dormers and a simple wooden bead board under the cornice. Brownstone lentils cap the windows.

In 1833 James N. Wells was living here, running his real estate business from offices on the second floor, accessed by a separate side door on 21st Street. Wells was a prodigious agent and was instrumental in the creation of the Chelsea area through the many deals he orchestrated.

By the second half of the 19th Century the house was owned by Levi L. Livingston, who also owned the little house next door at No. 185. Livingston was a decorative painter, responsible for murals and painted interior decorations of public and private buildings, including the Masonic Temple on 23rd Street and 6th Avenue. Instrumental in organizing the Association of Master Painters, of which he was president several times, Livingston had “heavy contracts for painting the North River steamers and the elevated railroads,” according to The New York Times.

After his death in 1882, his estate continued to maintain the property until finally selling it in 1910; advertising the house as a “three story tenement and store.”

The second oldest house in Chelsea, No. 183 9th Avenue has managed to survive, along with its three little wooden neighbors, despite change and progress. The small back yard protected by a plank fence still exists. Today it is home to a French café that Frommer’s says has a “vintage Parisian look” and which contributes to a charming antique vignette just steps from the popular High Line park.

uncredited photographs were taken by the author
Posted by Tom Miller at 2:57 AM