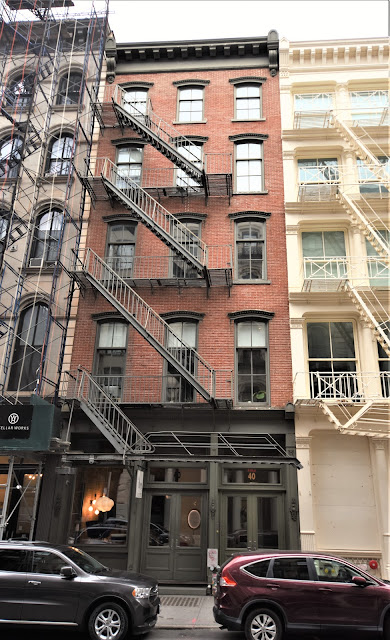 In the first years following the end of the Civil War the district around Broadway and Walker Street would see a rampant transformation from low wooden or brick structures to modern loft and store buildings.  But the estate of Joseph Bayley, who had been a fancy goods merchant, acted early, purchasing the boarding house at No. 40 Walker Street in 1859--nearly a decade before the rush of construction would begin--and replacing it with a five-story loft building.  Completed in 1860, it exhibited the elements of the commercial Italianate style--a cast iron storefront, graceful cast metal lintels that would have been equally appropriate on a house, and a bracketed cornice.
Among the first tenants were clothing manufacturers Archibald Purdie, Mahlon T. Hewit, and the men's furnishing maker Judson, Fowler & Co.
Judson, Fowler & Co. was operated by Isaac N. Judson, his son, Lewis, and Hickson Fowler.  It offered goods at sale prices in May 1861, an advertisement in the New York Herald touting:

Wholesale Stock at Retail--Shirts, Collars and Drawers, retailed by the half dozen, at wholesale prices.

An active philanthropist, Mahlon T. Hewit's name often appeared in newsprint regarding his charitable work.  In December 1860 he was one of several merchants involved in the support of Orville Gardner's Reading Room, for instance.   A letter to the editor of The New York Times explained "it prevents drunkards and saves drunkards.  One of the greatest causes of drunkenness is the want of virtuous places of sociality, and young men come to this room to spend a social hour or read a paper, rather than go to the grog-shop and drink or gamble."  He was also a manager of the Children's Aid Society.
When war broke out in the South, Hewit was enlisted by the Union to inspect uniforms.  Makers shipped their completed goods to three hubs--New York, Boston or Cincinnati--to be checked for quality before being released to the Quartermaster.  Uniforms arriving in New York were brought to No. 40 Walker Street.  Inspecting them was a ponderous task, one order alone called for "twelve hundred and fifty suits, to consist of over-coat, jackets and trowsers for cavalry."
Less eager to be involved in the war was Lewis H. Fowler.  In 1863 the Conscription Act was passed, initiating a draft to swell the ranks of soldiers.  Potential draftees could avoid the draft by paying a fee or by paying someone to take their place.  On September 4, 1864 The New York Times reported that among the "patriotic gentlemen who have furnished substitutes in advance of the draft" was L. H. Fowler.
A less expected tenant by 1871 was Griffith & Prentiss, real estate brokers.  Operated by John Griffith and John Prentiss, the firm would remain here for several years.
In the meantime, garment firms continued to occupy the building.  Gustave Mendelson's skirt factory was among the tenants in the late 1880's.  His family suffered a tragedy in 1889.  Two years earlier they took in their 18-year old niece, Hattie Gristner, when she became orphaned.  The New York Times noted that the girl "suffered from melancholia since the death of her mother."  She committed swallowed poison on October 21, 1889 and died the following day.
Jacob Webster, a manufacturer of men's furnishing goods, was led out of the building in handcuffs on May 14, 1891.  Arthur M. Mundt, of Mundt Bros., had filed a charge of assault against him.  According to Mundt, he had gone to Webster's office to collect a bill for $52.50 and when he handed him the bill Webster said "So you want to collect this bill from me--$52.50?" and pulled "something that had a metallic glitter" from his pocket and struck Mundt over the right eye.  Mundt reeled back and fell to the floor.  He then stormed off to the police station.
Also in the building were Jacob Webster's men's furnishing shop and the Metropolitan Dry-Goods Company.  The Evening World commented on the latter in 1894 saying it "ranked high among the leading jobbers in the trade."  By 1896 Livingston & Liebermann, makers of waists (the tailored blouses were the most popular women's clothing items of the time) and S. Citron & Co., underwear manufacturers, were also here.  That year S. Citron & Co. employed 42 women, 13 teen-aged girls and just one man (most likely the supervisor).  They worked a grueling 58-hour work week.
Robert Lewin was a wholesale dealer in cloth.  His meager business seems to have been failing shortly after the turn of the century and he came up with a creative way to close it without facing the humiliation of bankruptcy.  On July 26, 1904 The Sun reported that the sheriff had seized "everything in Lewin's place of business in Walker street--nineteen pieces of cloth, a safe and a desk."  The article explained that Lewin "says that he has been unable to attend to his business since May 14, when he was found unconscious in a toilet room in Terrace Garden in East Fifty-eighth street."
The puzzling thing was that there was no evidence to support Lewin's story.  "The police have no record of Mr. Lewin being hurt in Terrace Garden.  Mr. Susskind, one of the proprietors of the Garden, said he didn't know anything about it until May 21, when Coroner Jackson came to him and asked him what he knew about Mr. Lewin having been sandbagged there."  Susskind said he did not know how it could have happened without his hearing of it.  The Sun reported his liabilities at about $40,000--more than $1 million today.
At the same time Hirschmann Bros., dealers in hosiery and underwear, was in trouble.  Five months after Lewin's failure, Joseph and Henry Hirschmann's firm was placed in receivership.   But things were about to get worse for Henry.  On June 27, 1905 The Sun reported that he had been indicted for grand larceny and embezzlement.  For several years the firm had been essentially insolvent.  But to keep it running Henry lied to creditors about its assets--overstating them by 300 percent.  Creditors estimated that they "had been cheated out of about $170,000," or nearly $5 million by today's standards. 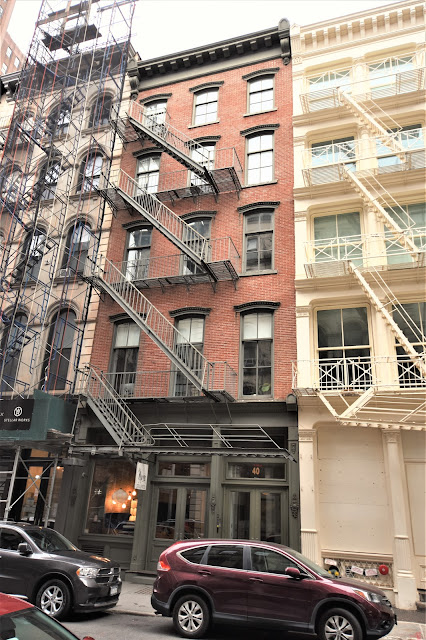 The building continued to house garment-related firms throughout most of the 20th century.  The rebirth of Tribeca in the last decades resulted in The Walker Street Theater moving in around 1991.   The first years of the 21st century saw O Lighting here, a division of Opad lighting.  Then a renovation completed in 2020 resulted in one apartment each on the second through fourth floors, with a duplex in the fifth and newly-constructed penthouse (unseen from the street).
photographs by the author
Posted by Tom Miller at 1:07 AM