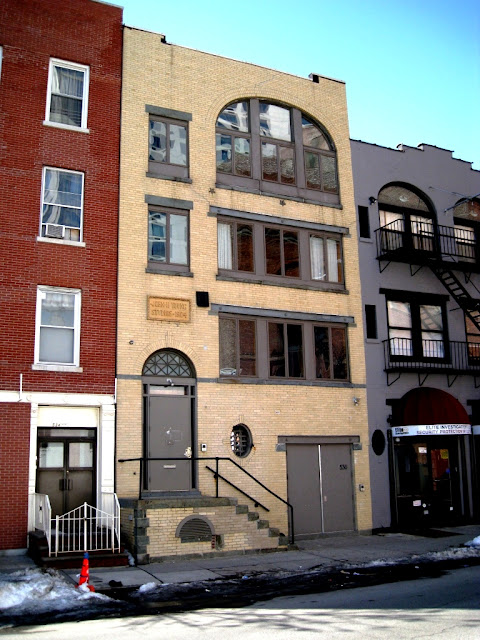 Prior to 1904 John H. Young worked in a studio tucked away in the fly-loft of the Grand Opera House on 8th Avenue at 23rd Street where, along with this staff, he designed the sets for stage plays.

Young’s attention to detail made him a favorite among theatre producers, among them David Belasco and Florenz Ziegfeld. By 1902 he had amassed a library of 10,000 photographs and 800 books which he used as historical and geographical reference. Rather than resort to exotic travel, he sometimes would send off to American Consuls, paying them for photographs of palaces, gardens, fisher huts, statuary and landscapes. The designer also kept antique weapons, armor and costumes as reference tools.

It was this strict adherence to detail that finally required Young to move. For each set that was to be designed, he would first assemble a tiny model using the scale of one-half inch to the foot. Young would initially meet with the producer, who would give him a synopsis of the acts and scenes. In some cases he read the scripts to ensure that every detail necessary to a scene would be included.

Then the miniature sets were meticulously fashioned – “the result being a degree of exactitude marvelous to contemplate,” wrote The New York Times in 1902. Tiny panes of real glass, carved doorways and staircases with diminutive balustrades were all included.

Because Young never discarded a model, several hundred of them being numbered and filed on shelves, and because his reference library of books, photographs and other artifacts continued to grow, he commissioned architect Arthur G. C. Fletcher to design a new studio at 539 West 29th Street.

Here, on a street lined with stables and small factory buildings, Young’s studio followed the basic architectural motif of its neighboring stables. Double doors on the street level allowed the large frames of painted canvas to be moved out – the average frame being fifty feet long and thirty feet high. The great expanse of glass in the large arched fourth floor loft window provided a wash of northern light by which to work. 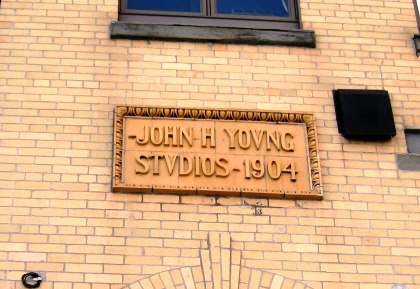 Here Young and his staff worked on the tiny models (which he said was “a feature of scene painting of which the public is wholly ignorant”), and the full-size backdrops. The producer was charged separately for different aspects of the set. Painting the canvases normally cost $500, the building of the set by a carpenter was another $400 and a fee for attaching the canvas to the paint frame and removing it again ran about $40. (The $40 fee had been free when Young or his staff did the work, however the Carpenter’s Union complained.)

In August 1910 Young risked losing his studio when his friend Edward T. Rosenheimer struck a buggy with his automobile, killing a young girl. To furnish his $25,000 bail Rosenheimer’s mother, Catherine Knobloch put up her home and Young offered his studio, “worth $38,000.”

non-credited photographs were taken by the author
Posted by Tom Miller at 3:38 AM