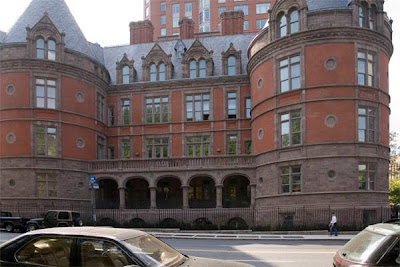 Cancer, in the first decades after the Civil War, had been associated by most with poverty and filth. As education and understanding of the disease improved, wealthy New Yorkers donated money for the establishment of the New York Cancer Hospital – chief among these being John Jacob Astor. By the time the cornerstone was laid on May 17, 1884 $360,000 had been raised -- $200,000 of that being donated by Astor.


Less than a month later, on June 2, 1884, while eating lunch at his summer house in Long Branch, New Jersey, the former President of the United States, Ulysses S. Grant felt a lump in the roof of his mouth and had trouble swallowing. A few days later, when he felt no relief, the General consulted a doctor.

A year later he would be dead from throat cancer.

The news of Grant’s affliction spread across the country and the disease was given new-found national attention, prompting further donations to the hospital which depended solely on private funding.

The site chosen was on Central Park West (then still called 8th Avenue) and 106th Street. Along with the commission, architect Charles Coolidge Haight was given guidelines from physicians on the most up-to-the-minute theories on hospital design.

Ventilation and sanitation were utmost in the minds of the doctors. In compliance, Haight designed a 16th Century French chateau, mainly because he was requested to construct circular wards. Such a shape would, necessarily, make impossible corners where dirt and germs could accumulate, would provide for more space between the heads of the beds and would give the nurses greater supervision of the patients. The corner towers of a chateau were perfect for such an arrangement.

At the opening of the Astor Pavilion, the first completed section, on December 6, 1887, The New York Times said “The completed building is externally picturesque as it stands facing Central Park.” Dr. Fordyce Barker, the head consulting physician spoke not only of General Grant, but of the Crown Prince of Prussia who died a few months after the former president.

The building which The Times called “a conspicuous ornament to the upper part of the city” was built of pressed Philadelphia brick with stone trim. An arched loggia connected two of the towers on the first floor, topped by a deep, balustraded balcony on the second; these were included by Haight to give patients access to air and sunlight. It was the only cancer hospital in the United States and only one of two in the world. The first pavilion was for female patients only; although plans were already underway for a men’s pavilion.

The kitchen was on the topmost floor to keep odors and smoke from the patients. Also on the top floor was the operating room “where there is plenty of light.” Ventilation in the wards was of utmost importance. “It has been found that the air of each ward can be changed completely with closed doors and windows every five minutes, and that, too, without producing annoying and dangerous draughts,” said The Times.

Openings in the brick walls, between the windows, brought fresh air into the rooms. The “vitiated air” was sucked out through an iron column in the center of each ward by a fan in the cellar.

Separate from the main pavilion was an outbuilding for a boiler, laundry and servants’ dormitories. A small mortuary was included in the plans. 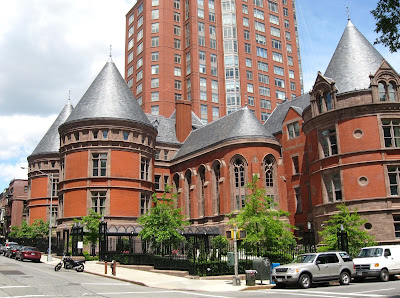 By January 1890 241 patients had been admitted, 131 of those for free. That same year the men’s pavilion, nearly matching the original, was completed in 1890 along with the attractive Gothic chapel.

A year later, at 2:30 in the afternoon of December 18, 1891, patients and staff were alarmed when the building was pelted with rock fragments from blasting bedrock in Central Park. “The handsome building of the New York Cancer Hospital…looked yesterday as if it had gone through a bombardment of shot and shell. Nearly every window in the house was shattered, slates were missing from the roof, and the walls were defaced with gaps in the stucco,” reported The New York Times.

“One of the wards was filled with patients and visitors. Intense excitement prevailed, and several of the patients fainted, but fortunately no one was hurt…One piece of rock hit the ceiling directly over the bed of a patient who was lying there very ill. She sustained a severe nervous shock.”


Cancer was a formidable opponent and the extreme death rate earned the hospital the nickname “The Bastille;” because those entering the facility had little chance to leave alive. In the early 1900s a crematorium was installed in the cellar to help deal with the many corpses. Donations tapered off and the hospital struggled financially.

The hospital underwent two name changes before moving out of the old building permanently in 1955. Shortly thereafter Bernard Bergman purchased the structure, converting it to Towers Nursing Home. Bergman managed the home with scandalous disregard for the patients or their conditions. Residents complained of no heat, vermin infestations, neglect, filth and odors, and physical abuse.

The wards, created with no corners to preclude the accumulation of dirt, were soiled and sickening. Prompted by numerous grievances, state and federal authorities initiated an investigation. Towers Nursing Home was closed in 1974. Only when the New York Landmarks Preservation Commission gave the building landmark status was demolition prevented.

In 2001 Chicago developers MCL Companies purchased the structure. Architects Rothzeid Kaiserman Thomson & Bee had been knocking around the renovation of 455 Central Park West for almost 20 years. The two firms began working together to bring the building back to life. 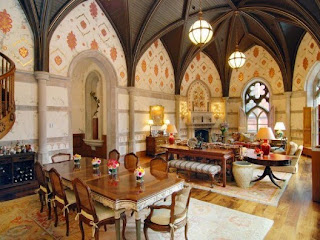 The extent of the decay was far worse than anyone had imagined. The entire interior was gutted. Everything other than the exterior walls had to be replaced. Using historic photographs, RKT&B removed mid-20th Century additions, replicated details that could not be saved, and used parts of the demolished buildings to restore the main structure.
In 2004 the renovated building was complete.  The historic hospital consists, now, of luxury apartments – even in the Gothic chapel – connected to a 22-story tower. The renovation earned no fewer than six awards from preservation and engineering organizations.
Posted by Tom Miller at 3:08 AM