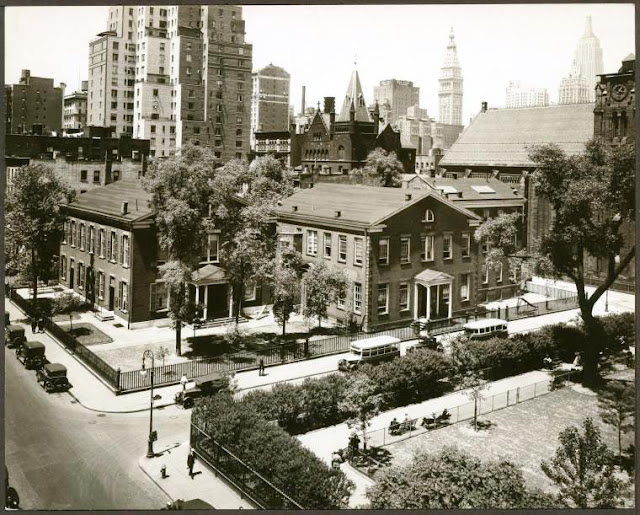 On the western edge of Stuyvesant Square, quietly sitting behind a heavy mid-19th Century cast iron fence, are the 1860 Friends Meeting House and Seminary -- two unassuming and particularly unexpected structures in the heart of Manhattan.

The buildings grew out of a schism within the Quaker community.  Having survived two centuries in America, modern Victorian religious ideas cracked what had been The Friend's seamless ideology.

Like the other pilgrims, the Quakers arrived in America in the 17th Century seeking relief from religious persecution.  Instead, like the Jews of around the same time, they were met with discrimination.  Governor Peter Stuyvesant openly reviled both, in 1656 forbidding the citizens of the Village of Flushing "not to admit, lodge or entertain...any one of the heretical and abominable sect called the Quakers."  The Quakers were forced to meet and worship in secret; an act that was quickly outlawed by Stuyvesant.  Nevertheless, their numbers increased and by 1681 were worshipping and convening in the open.

Things continued to get better for the Quakers.  In 1734 they were granted the same civil rights as other British subjects and the Militia Act of 1755 exempted them from serving in the military against their religious beliefs.

But the road became rocky in the first decades of the 19th Century.  The country was overtaken by a religious revival that focused on intense Bible study.  Traditionally, the Quakers relied on direct inspiration from God -- "The Inner Light."  More important than Bible teachings was the personal interaction between the worshipper and the Diety.

While one group of the Society of Friends accepted the new Christian movement, another group led by Elias Hicks of Long Island preferred the traditional Quaker teachings.  Known as the Hicksites they quietly removed themselves from the larger sect.  Rather than disturb the customary peace of yearly meeting of the Society of Friends in 1827 the Hicksites obstained from the proceedings.  The following year in what was to be called the Hicksite Schism, the Society divided itself into the Orthodox and Hicksite branches.

In an ironic twist, the Hicksites acquired a plot of land on the former Peter Stuyvesant Estate where fashionable homes had begun appearing.  Society of Friends member Charles Bunting not only designed but oversaw the construction of the Meeting House and the adjoining Seminary.  His red brick structures, drawing from Federal and Greek Revival designs, are simple and straight-forward. 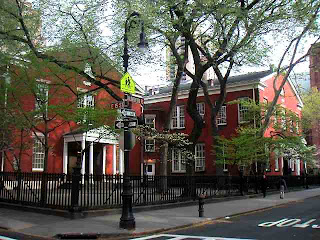 The Meeting House sits back from Rutherford Place at the corner of 15th Street.  The Greek Revival-style end returns of the roof cornice mirror the shape of the pediment over the plain porch.  Four white wooden columns support the porch.  Unadorned window lintels and sills speak to the simplicity of the lifestyle of the Society.

Next door the Seminary nearly matches the Meeting House.  Placed closer to the street, its porch is shallower and the corners boast attractive stone quoins.  The T-shaped school has a separate entrance on the 16th Street side.  The resulting complex is architecturally charming and serene. 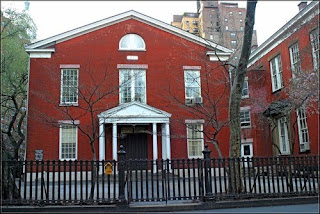 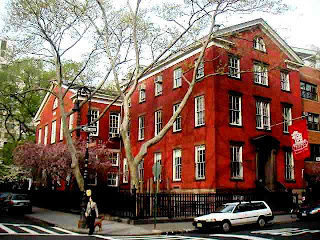 Photographs by Tom Fletcher
The Society of Friends managed in those Victorian years to harmoniously balance their political views with their religious pacifism.  They rallied against slavery, technology (the construction of the Erie Canal was a major issue for them), and public schools.  As late as 1912 the New York Times reported that "the Quakers to march in suffrage parade...men and women of the Stuyvesant Square body will be side by side in line."  The article went on to remark that "Part of the Quaker doctrine are equal rights for men and women, and the fine housekeeping qualities and gentleness of Quaker women have always been an unspoken answer to the reproach that equal rights would make women either masculine or unwomanly.  The Quakers have practiced their belief, but not have discussed it outside their own society.  They are now coming out to stand for all other women."

A century and a half after being built, the Friends Seminary continues as a vibrant private day school; the oldest continuous coeducational school in the City.  Always progressive the Seminary was the one of the first schools, in 1878, to open a kindergarten.  In 1925 it became the first private school to provide a full-time psychologist.

In 1958 the two branches of the Society of Friends shook hands and reunited.  Their beautiful and uncomplicated red brick buildings on Stuyvesant Square are an integral component in what is now the Stuyvesant Square Historic District.
Posted by Tom Miller at 6:38 AM